Will The Next 35 Years of Print Finishing Be the Best?

Imagine a pressman from the 1940’s being transported to a modern digital printing department. He wouldn’t know where to start. Now imagine a bindery equipment operator from the same era dropped 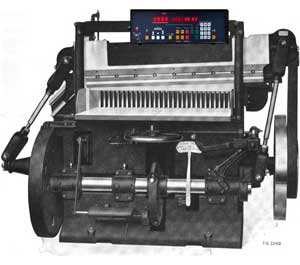 into a post-press department today. It probably wouldn’t take him or her long to find their way around the guillotine cutter, the folding machine, maybe a saddle stitcher, and start producing work. There would be questions, but the underlying technologies, despite being decades apart, are similar.

This April I passed the 35-year mark in print finishing work although it seems like yesterday it all started. This must have inspired me to pick up a dusty old book, The Lithographers Manual, Seventh Edition, from 1983. Essentially this was the printer’s Bible of its day as well as a great introduction to a complicated industry. I don’t recall who gave it to me. I was probably pestering a colleague with too many questions and they either gave it to me or told me to go buy it.

As I browsed the old book it brought to mind some obsolete terms.

Blueline (Hint: it's not on the subway map)

Stripping (Hint: it's not what the pressmen are talking about when they spent last night at the bar)

Goldenrod (Hint: it's not a weed)

Ruby (Hint: it's not an old girlfriend)

Stat (Hint: it's not a command from a doctor)

I used to hear these daily around the shop when I first started in 1980. These will bring back memories to industry veterans. For newcomers, you’ll just have to wait for the glossary we’re putting together. Or ask a co-worker whom you suspect of being an old-timer.

And there are more: Mechanicals, Paste Up, Overlays, Camera Ready Copy, Composite, Dot Etching, and Process Camera, to name a few. A lot has changed. In 1980 there were no cell phones, no internet, no laser jet printers, no Post-It Notes, personal computers as we know them were just being born, and the first space shuttle had yet to fly. 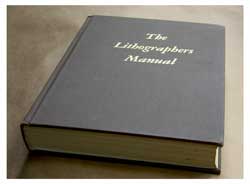 Not only that, entire chapters in The Lithographer's Manual are now only of historical value. Some chapter headings include The Preparation of Type and Art, the Camera Department, Color Separation Photography, The Stripping and Photocomposing Departments. Chapters that still hold some relevance include The Platemaking Department, The Proofing Department and Lithographic Presswork.

Ah, but then we move on to the single chapter on The Bindery with the following sections: Planning, Sheet Cutting, Folding, Assembling, Binding, Trimming, and Finishing Lines. It’s funny to see how much of the basic information in that lone chapter is still relevant today. Most of the difference is in computerized controllers, communications, and accessories that have been added to technology that’s been around a long time.

One thing that has definitely NOT changed is the need for planning. A good print planner will organize the job starting with the bindery and move backwards towards prep. This means that knowledge of all the elements involved in print finishing is still necessary, including how the job will be cut, folded, assembled, bound, finished and mailed or distributed.

As an apprentice, I always wanted to do more and learn more and I read that manual cover to cover. I naively thought that if I worked harder I might get a chance at a “promotion” into one of the more ‘interesting’ departments like prep or press.  However the harder I worked, the more work came my way. It wasn’t long before I realized I was going to be a fixture in the post-press department, probably because I always did my best, even on those days when I didn’t really enjoy what I had to do.

A few years later I had a stint doing typesetting, camera work, mechanicals, stripping, platemaking, and press work at a small commercial print shop. It was interesting, for sure, but I learned I didn’t like ink under my fingernails and embedded in my skin. So it wasn’t long before I left the ‘interesting’ work to find myself again at the back of the line in post-press work. I was home again!

Ironically, had I worked my way up to being a stripper or cameraman at a larger shop, I'd have promoted myself out of a job a long time ago. Most of the prep guys I knew are long gone into other industries altogether. With the clarity of hindsight I see that sticking with bindery work was a hidden gift. I just didn't know it at the time.

Will that chapter on The Bindery still be relevant in 35 years? I wouldn’t necessarily bet on it. There is equipment today that will do it all from beginning to end with quantities as small as one. Yet if post-press history is any indicator, I wouldn’t bet against it either.

I would wager that if you have the chance to read through The Lithographer’s Manual or similarly older texts, you’ll learn something useful. If you understand the obsolete techniques, you’ll have a great understanding of how printing all comes together, even in a digital world.

And should you decide to pick an industry veteran’s brain about something, be sure to ask him or her where they used to keep that bucket of half-tone dots.

As always feel free to ask this old-timer any questions you might have or leave your comments and questions below. I have lots of gray-haired friends to reach out to if I don’t know the answer!