What Suddenly Causes Bent Corners on My Folding Machine? 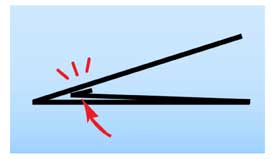 This is one of the most frequently asked questions we get from folding machine operators. One Bindery Success™ reader told us she had been doing a regular mix of jobs without any problems for a long time. One day a bent corner (also called “dog ear”) appears. To answer the question we first need to determine which type of bent corner we’re dealing with.

“Inside” bent corners are those that occur inside the fold as it’s formed within the buckle space at the mouth of the fold plate. The illustration on the right shows a classic example of that in a letter fold. Every folder operator experiences these at one time or another. We show a simple, effective fix here in a previous video and in this article.

“Outside” bent corners, as the name implies, occur outside the buckle space, after the fold has already formed. (photo at right) They tend to show up on the outside of the brochure. There are two primary causes for an outside bent corner:

1) One of the closed fold plates isn’t pushed all the way in to the stops. It’s easy for this to happen, especially on the lower fold plates which are a bit harder to push in. Sometimes an operator cocks a fold plate to straighten a score or perf. One side will be hanging lower than the other. Unless they open that particular fold plate to use it, it’s easy to forget that it’s cocked. Then a bent corner occurs on a later job.

2) One of the deflectors is too low. When they’re installed, deflectors are precisely positioned between two fold rollers. When it’s closed, paper passes smoothly and evenly. But if a deflector is bent, one or 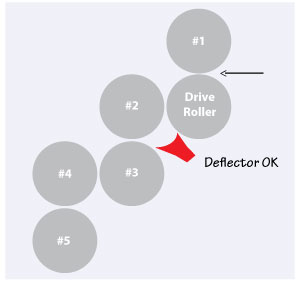 both sides can be too low and the passing sheet will catch its edge on the low point. The two diagrams below right show an exaggerated concept of a low deflector. We’re only showing one for the sake of clarity.

This was the cause of the dog ears shown in the photo. A quick adjustment to raise the deflector, along with removal of a nick, solved the problem.

Zero make-ready fold plates are also susceptible to deflector damage from paper jams. (Zero make-ready plates have built-in deflectors which means you don’t have to remove the plate to raise or lower the deflector.) In this case, one or more of the deflector segments can bend out of position, making it easier for paper to catch and bend.

Sometimes bent corners are the result of a combination of factors. Here are some other possible causes:

So if bent outside corners have started to plague you, a deflector is the most likely culprit. But check the other items I mentioned to rule out the obvious.

If you decided your deflector needs repair or replacement, call your mechanic. Have him or her check all the deflectors as well as the entire folding section. Fold rollers or fold plate rails could need adjusting along with the deflectors; it’s good to check it all. If you choose to do it yourself, get specific installation instructions. If you don’t install deflectors correctly, your problems will remain.

Thanks to Dave Double of Double Equipment and Kristie Harding of Thayer Publishing for their contributions to this article.

Share this article with your friends and colleagues using the social buttons above!