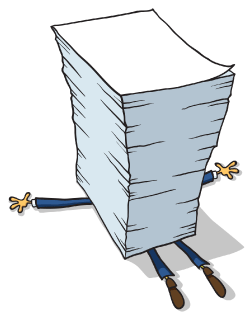 Bindery department managers often find themselves caught in a no-man’s land where responsibility is high but authority is low. A heavy workflow with tight deadlines is the norm. But their hands might be tied with regard to authorizing overtime, hiring extra or temporary personnel, outsourcing decisions, or equipment purchases. How are managers to remain effective without giving in to frustration?

During my nearly twenty five years as a bindery supervisor, my co-workers developed an early-warning indicator telling them when tensions were running high in the bindery department. “Look out, Andre’s hair is messy today. Steer clear!”

When I learned that pulling out my hair didn’t solve anything, I decided to start thinking like a business owner. It was time to develop my own strategy and tactics for the job at hand. Dictionaries define “strategy” as “a plan of action designed to achieve a goal.” It’s your purpose at work. Every company exists to provide unique value for its customers. As a departmental manager or supervisor, your purpose is to support that mission, whatever it is.

In short this usually means you must complete, on time, whatever work gets thrown at you. Maybe your job has a prettier description in the company manual but the bottom line is you have to handle whatever comes down the pike. Unless you plan to buy the company, you don’t have to figure out strategy. It comes from above and is done for you.

That leaves tactics. What you can do is figure out how to accomplish your mission really well. You can’t change what’s coming your way, so accept it and make the decision to do a superb job.

Some companies outline how you are supposed to provide that support, usually in some sort of detailed systems manual. These are your tactics. Other companies provide no guidelines whatsoever and most printing businesses probably fall somewhere in between.

If you’re a bit short on tactical guidance, here are a few lessons learned over the years that helped me to do a better job. Some occurred to me in hindsight, but in any event, they might help you today.

Figure out how to do the hard stuff really well. Everyone (including your competition) knows how to do the easy stuff. Most shops have staff that can cut, fold, stitch, shrink wrap, pack, and more. That’s a given.  Not so many shops however, could gather a night shift with just a few hours’ notice to hand assemble 5,000 multi-piece media kits into hand-glued pocket folders and get them in the mail the following morning. That’s hard. I know from experience and many late nights!

One of anything in business is bad. For every “one” in your department, have a backup. If you have only one employee who can run the saddle stitcher, train a second or have an outsourcing plan. If you have one of any piece of equipment, get a backup or figure out what you will do when it breaks down. In the world according to Murphy, it will break down just as you are running a critical job for your most important client, and there will be no time to outsource.

Use cross-training to reduce bindery bottlenecks. I know for example, it’s not easy to quickly train someone to set up and run signatures on a folder. But if you can train someone to handle paper so they can load, unload and do quality control checks, you have a lot more flexibility. Maybe you can add a second or third shift. Maybe you can pull your main folder operator from there to run something else more pressing that requires his skill set.

Be prepared for anything. It’s the nature of post-press work. If a designer can think it, at some point you’ll end up doing it. Think how boring your life would be without all those impossible jobs that you do. Keep a list of resources you can tap into when those strange jobs appear.

Study other industries and do what the successful companies do. Late one evening I stopped in a Dunkin Donuts® and got a mini business lesson along with my cup of coffee. Two teens were manning the store. They tried to drag me into their argument about when it was appropriate to add mayo to a hot sandwich ordered by a previous customer. The girl insisted it had to be after the sandwich was heated or else the customer would get sick. I agreed with the young man who said it made no difference. The mayo should be applied prior to heating and then you’re done with it; no need to re-open the sandwich for that extra step.

“Let’s see what the book says,” said the young fellow, referring to the store’s operating manual. He turned to the page that gave detailed written and graphic instructions about how to precisely prepare the sandwich in question. (He happened to be right, according to the book.)

The manual also described how to do everything else in the store so there would never be any question. How else could multi-million dollar operations like this and other fast-food places be operated by young teens unless they had a system for everything? Systematize and document as much as possible in your own department. It will save you from those pesky, repeated questions and will help you to train others.

Know your equipment or have staff around you who know it well. This shouldn’t need saying, but I’ve seen many places where there is a lack of basic knowledge about bindery equipment that is relied upon for daily production.

Stay calm. Instead of freaking out when presented with seemingly unreasonable deadlines, take a breath…or two. One useful problem-solving acronym to remember is APIE: assess, plan, implement, evaluate. It’s a simple and systematic approach to managing post-press problems. Do this instead of telling the production manager that they’re insane. (Been there, done that. It’s not helpful.)

Do something fun and challenging outside of work. Volunteer, take some classes, learn a new skill, or take up a hobby. It keeps the pressures of work in perspective.

As Leonard Bernstein said, “To achieve great things, two things are needed: a plan and not quite enough time.” Sounds like all of us in post-press are destined for greatness!

Feel free to share your bindery survival tactics below or pass this article along to your colleagues using the social buttons.