Getting More from Your Bindery Equipment

Want to find out if your next interviewee for a bindery department opening is a good candidate? Try this experiment. Show them a piece of bindery equipment and briefly explain what it does. Then pause for a few moments and ask them, “What’s on your mind?” If they answer, “I was wondering what else I could do with it,” then you have a lifer who is perfect for bindery work. 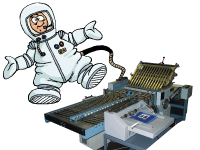 Born out of nature and necessity, this trait seems to be universal among good bindery staff. Most of us who stay in this line of work have an inquisitive mechanical nature anyway. Working on bindery equipment is like playing with giant but expensive Lego® sets. You simply can’t help but try to come up with a new creation that’s not in the book!

Then there’s necessity. It’s easy for production bottlenecks to form at the bindery. It’s the nature of any manufacturing environment that the last guy in line is prone to have less time than originally planned and almost certainly will not have a cushion. The folks ahead of them used that up. Thus we’re faced with the necessity of having to perform, usually last-minute and most definitely with whatever equipment we have on the shop floor.

The resulting creativity is often impressive, fun, and useful to share with colleagues. In that spirit we have a clever bindery setup submitted to us by Jim Murphy of Crescent Printing.
The job at hand is a letter sized piece which needs to be ink jetted, then folded, then triple tabbed. The method they had been using was to fold the job in half in one operation, then ink jet and tab in a second, separate operation.

Recently they devised a way to accomplish all that in a single operation. First, they purchased an independent control box, sometimes called a self-control box, for the right angle section of their MBO folder. (Sure would be nice to install these on some people I know…) These control boxes simply let you run your right angle section anywhere you want, independent of the main folding machine section. Basically you’re turning the right angle into a separate, stand-alone folding machine, good for all sorts of uses. (Read a related article here.)

Next, and this is my favorite part, they bought a high-speed conveyor belt from a local surplus store—for only 30 bucks. Heh. With these inexpensive upgrades, they now assembled the various units as shown in the video below. The piece is first processed on their Video Jet BX system and then runs into the MBO right angle section for the single fold in half. The folded piece is delivered on the conveyor for forwarding to the tabber for triple tabbing.

Every time you produce a bindery job in less time, with fewer people, you boost your net profits. If you repeat the job, the savings and the impact to net profits will be significant over the course of a year.

Another huge benefit to doing more, faster, with what you have, is that you gain a competitive edge. These days, if you can turn any given job a day sooner or even hours sooner, you have the advantage if time is an issue with the buyer. And time is always a precious commodity.

Most of us know the story of the troubled Apollo 13 space mission which suffered a life-threatening mechanical failure enroute to the moon. The engineers in Houston calculated the astronauts were going to be nine hours short of oxygen. Incredibly, the key to their life-and-death solution involved duct tape and a piece of plastic bag. Yes, they had a roll of the tape on a space mission! It allowed them to modify the air scrubber system and kept them alive all the way home.

Although our bindery jobs are not as glamorous or newsworthy as the astronauts, there is a similar spirit at work. Murphy also submitted a unique inline saddle-stitching and tabbing operation which you can read about here. In the bindery, the only thing we can do today is to work with what’s at hand so that we can get it done now. Sometimes we even use tape!

The printing industry may be changing, but as Jim Murphy and his colleagues show us, the inventive spirit is still alive and well! Or perhaps Murphy is on a campaign to re-write Murphy’s Laws with a positive spin.

If you have a creative bindery solution or tip you’d like to share, just let us know here. We pay from $100 up to $250 for tips and videos we can use. If you like the article, please share with your colleagues using the toolbar at left or at the top of the page. As always, we welcome your stories and comments below.