How to Avoid Sabotaging Your Print Production Planning

With a snowstorm approaching I’m reminded of the thankless job of forecasting and estimating. One local forecaster cheekily said a couple days ago that we could expect between 19 and zero inches of snow. If you think about the extent to which our printing industry is based on estimating, I’d say we do a better job than the weather guessers. But do we? 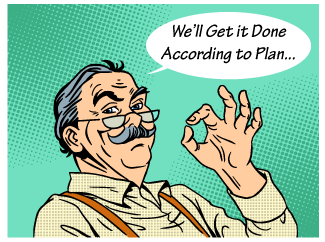 I remember many times as a bindery supervisor arriving at work in the wee hours of the morning (or staying late) because a job didn’t come off press when planned. The fact that this was the rule rather than the exception made decision-making and planning difficult.

Another notable example of forecasting gone wrong was my decision to start a trade bindery. I based all my equipment purchases on estimates given to me by one prospective customer. You can guess the outcome. Of course their well-intentioned forecasts were completely wrong, likely because one of their customer’s estimates was wrong. It forced me to scramble for work which simply wasn’t there and in short order I had to close the shop.

We all use estimates every day to help us make decisions. We have to. Before scheduling a pickup, the folder operator may have to estimate how long it’s going to take to finish a particular job, even if he or she has never run that job. The bindery supervisor may be asked to estimate how many extra people will be needed to produce a large job. The owner of the company may be forecasting how much saddle stitching work they’ll do over the next five years before deciding on a new stitcher. Print production managers spend their days estimating and forecasting. The fact that their estimates can change by the hour testifies to the difficulty of the job.

Bad estimates usually result in faulty decisions, yet we can’t escape estimating and forecasting. So how can we improve our estimates and ultimately, our decision-making?

Writing in the Harvard Business Review on Decision Making, the authors say, “When it comes to business decisions, there’s rarely such a thing as a no-brainer. Our brains are always at work, sometimes, unfortunately, in ways that hinder rather than help us. At every stage of the decision-making process, misperceptions, biases, and other tricks of the mind can influence the choices we make. Highly complex and important decisions are the most prone to distortion because they tend to involve the most assumptions, the most estimates, and the most inputs from the most people. The higher the stakes, the higher the risk of being caught in a psychological trap.”

We like to think we’re rational. But being the complicated human beings we are, we’re only partly rational. This makes it absurdly easy to fall prey to decision-making traps. One of several psychological traps is the estimate or forecast trap.

The HBR article goes on to suggest three things to do to avoid falling prey to our own psyche.

1) Avoid overconfidence. Challenge your assumptions by considering the extremes. Think of all those things that might happen.

Let’s say your saddle stitcher routinely does 60,000 8-page books a day. You count on that number for estimates. What would happen if it only produced 45,000 because of a static problem with a lighter weight paper? Might you only get 25,000? Is it possible or likely? Is there anything different about this job? Our tendency is to narrow the range of possible outcomes based on previous experience. In turn that leads to overconfidence and faulty estimates. Widen the range of possible outcomes before making your estimate and you increase the odds of making a better decision.

My brother owns a restaurant in Florida. Soon after their grand opening, his manager, thinking aloud about planning and staffing said, “What’s the least amount of customers you think we’ll ever have?” Everyone offered an estimate and everyone was soon proven wrong. The restaurant had one day with zero customers. Not one person had guessed there would ever be zero business. These days the place is full nearly every night. Now they all know that “zero” is still a possibility; remote, yes, but entirely possible.

In my trade bindery experience I never considered that my one main start-up customer would do zero. My worst-case assumption was around 50% of what was estimated. Live and learn.

2) Avoid the prudence trap. This is where you make a decision “just to be on the safe side.” Prudence can back fire.

“We don’t have the job yet but let’s order the paper just to be on the safe side. They always place this order around this time of the month.” Of course that’s the month they cancel their regular order.

Or consider the estimator trying to price an unusual printing and finishing job. He goes to every department to get estimates on how long it will take. Knowing it might be a little more difficult than usual, everyone from prepress through finishing pads the estimate “just to be safe.” The sales person never gets the job because the estimated cost ends up being unreasonably high with all the padded costs.

Be honest and realistic in your planning, your expectations, and your communication with others to avoid this.

3) Avoid the memory or recall trap. Avoid making a decision based on your own feelings or assumptions about a situation. Use independent data or statistics.

For instance if you witness a traffic accident, you’ll assign yourself a higher probability of being in an accident than is actually the case.

How true is the statement I made in the beginning about printers doing a better job estimating than weather forecasters? I don’t have any real numbers so I have no accurate idea. It’s based on the fact the outcomes were usually successful in that jobs got done. But how accurate were my own original estimates? How many times did I have to make new estimates and re-work my decisions? Probably a lot. We’ll never know for sure. But that’s how easy it is to let past experience color future decision-making.

In most cases our mind helps us make the correct initial decisions. It processes things efficiently and subconsciously and the result is we usually do a good job. Yet as the stakes increase, it’s good to be aware that our mind could be setting an inadvertent trap for us. That’s when it’s time to step back and challenge our assumptions and beliefs.

Have a story about estimating gone bad, or good? Please feel free to share below!