How to Avoid Cuts from Rotary Cutting Tools on Folding Machines

The folding machine operators I’ve met would never let a little cut on their fingers keep them sidelined. You’ll hear, “Ah…it’s just a flesh wound. A little duct tape will fix that.” After working with rotary cutting or perforating blades for many years you’d think an experienced folder operator would never get cut. 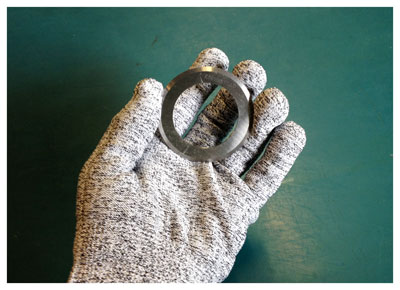 Yet all it takes is a split second of carelessness, mishandling, or reaching into the folder too quickly to clear a paper jam and you’ve got a painful cut. Heck, we've had people at trade shows cut themselves while admiring our uniquely constructed durable blades! (Don't worry, we'll have gloves on hand at Graph Expo in Orlando, FL at Booth #2611.)

Despite the potential for serious injury with cutting and perforating blades, it doesn’t seem to be a major problem. According to a Bureau of Labor & Statistics report, the incidence of cuts, lacerations, and punctures in the printing industry which result in lost days from work is too small to be statistically significant. Nevertheless those little cuts and nicks are significant to us, so let’s take a look at some effective ways to prevent them once and for all.

Use Cut Resistant Gloves
I’m not a big fan of gloves, but after cutting myself one too many times on various folding machines I only recently decided to try 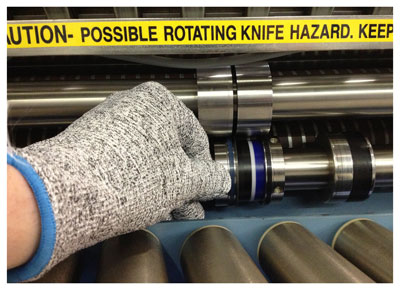 them. Cut resistant gloves are usually made of a proprietary mix of synthetic fibers such as polyethylene, spandex, Kevlar, fiberglass, and other material. They are lightweight and thin enough so that handling small parts is easy yet they are said to be stronger than leather.

Most of them seem to have been designed for kitchen use, but a knife is a knife. And kitchen use requires a similar level of manual dexterity as does bindery work. I found them to be quite good for installing or removing cutting and perforating knives on folding machine accessories. It’s no hindrance to leave them on to finish your setup once the knives are installed.

Bear in mind that these are not cut proof, they are cut resistant. If you apply enough force or cut repeatedly on the same spot, the knife will get through. Also, you don’t ever want to use them near power equipment that is running. On a scale of 1-5, both gloves mentioned below have the highest cut-resistance rating of 5.

Always Use Sharp Knives
Sharpen cutting knives frequently and replace them when needed. Perforating blades don’t get sharpened but eventually they do need to be replaced. When you put an obviously dull or damaged set of knives on the folder you’ll just have to replace them as soon as you start to run. So you might as well do it before you start. Handle them one less time and save the extra setup.

Use Proper Storage
Store them in an appropriate area, preferably on a suitable blade holder. Avoid leaving the cutting edges exposed. If they must be stored in a drawer, put them in a protective wrapper or package.

Use Proper Handling
Pick up rotary cutting tools or perforating blades by gripping the inside edge of the blade, or by gripping the sides, away from the cutting edge. I’m guilty of picking up perforator blades (and even knives) by holding them on the sharp outside edge.

Never Try to Catch a Falling Blade
Been there, done that too. It’s our instinct to reach out and grab something the instant we drop it. When you’re setting up a machine, it helps to re-set your brain by reminding yourself aloud to let a dropped knife fall. It’s not worth the pain.

Use Extra Caution with Paper Jams
Here is another habit that you might have to break when working with knives and perf blades. When there is a paper jam you might normally just reach in to start pulling it out, working the rollers back and forth by hand. If there is a cutting knife involved, keep your eye on it as you reach in. All it takes is one little slip and you can get a serious cut. You should also first shut off power and hit the safety stop. In some cases it’s easier to remove the slitter shafts first, and then remove the paper jam. Then carefully re-install the shafts and check the cut before running.

Use common sense, and get yourself a pair of inexpensive cut-resistant gloves. Have a comment or suggestion about handling knives? Feel free to share your story below.