How the Printing Profession is Like the Red Bull Air Races 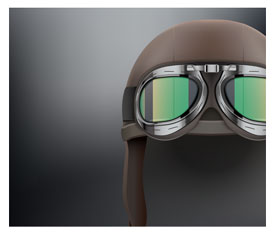 One effective way to get fresh ideas and inspiration for improving our productivity is to look at other industries. While I was watching a recent video about the latest Red Bull Air Races, it dawned on me that there are several similarities between the printing profession and competitive air racing. Because of the competitive nature of both industries, I figured there was bound to be something we could take away for our own personal and professional use.

It’s no news flash that the print industry is competitive. As with air racing, we don't see our competitors nipping at our heels during the course of a work day. We really don’t know how well we’ve performed until after the job is delivered to the customer. Or worse, we don’t find out how we performed until we learn, much too late, that we’ve lost a customer.

In the second video below, you can probably relate to the disappointment on Kirby Chambliss’ face when he thought he had done so well. Here he had given a maximum effort only to learn he was heavily penalized for basic mistakes.

Said Chambliss: “I knew I had to go really fast…I guess I concentrated on being so fast I really wasn’t even aware that I was high [in the gates/pylons]…There was no reason for it; it was just a silly mistake…I was just pushing it out trying to get everything I could out of the airplane.”

Another similarity is the necessity of team work. Even though our graphic arts jobs tend to be compartmentalized and it feels like we’re alone at times, we are indeed working with a team. During the air race, the individual pilots are the stars of the show. Yet it took an enormous team to put a staggering amount of equipment into place. Each air show location requires at least:

Which brings us to our next similarity—logistics. The logistics of a general commercial printing company will change each day and the changes can be huge. While generally not on the size scale of a Red Bull event, the impacts of logistical problems are all relative.

One week you might have 5 trailer loads of saddle-stitched books to produce for one customer. Next week you might have to deal with over 100 orders from dozens of customers. If you’re part of a small print finishing department with three or four colleagues, variable logistics will be a challenge. It could easily feel like you are preparing for a world-class event.

Another similarity between the printing profession and air racing are the demographics. The average age of the 14 Master Class pilots is nearly 47, with two at 59 years of age. Only two are in their 30’s with the youngest at 31 and there are no women. Although it’s not very scientific, our Facebook fan page stats give us a good idea of our similar cross section: 78% are male, 69% are 35 or older.

There is no doubt that with air racing you need an exceptionally high level of skill and experience that can only be had with time and practice. Although not as extreme, successful print suppliers also need to offer a high level of service that only happens with a skilled, experienced staff. I always remember seeing quite a few gray-haired people being around the printing and print finishing industries, so I don’t think this demographic is necessarily a sign of our times.

So what can these similarities teach us? My own flight training as a private pilot and my passion for aviation continues to help me professionally. (Hey, I came up with an article on the printing industry and aviation because of it! There’s also another related article here.) There are at least five attitudes we can borrow from these extraordinary pilots and teams to improve our own performance.

1) Try to break your own record. Michael Goulian, who learned to fly before he could drive and did his first solo flight at 16, says it’s all a “game of small steps and small modifications” for him and his team. In print finishing we’re always racing against the clock, and the clock seems to be running faster with every passing year. Each small improvement we make will help us to finish those jobs faster and better.

2) Beware of mistakes. With experience there can be a tendency to relax and let down our guard, especially about basic items. We run on auto-pilot, usually with great success. When deadline pressures increase, you try to get everything you can out of your equipment and as Chambliss said, that’s when the silly mistakes happen. Use your checklists, systems, and whatever other tools you have available to prevent mistakes.

3) Improve your focus. Pilot Yoshihide Muroya includes meditation as part of his pre-race preparation. Paul Bonhomme, a two-time world champion who has raced in all 58 races since 2003, says, “It’s all about preparation; you have to put the work in and then the decision making is easy…”

4) Remember you are not alone. The odds are you are part of a team, even if it’s a small one. You can hear all the pilots frequently using “we”. Better results happen with better teamwork, with better communication.

5) Never give up. Sometimes the finer things come with age and a little gray hair. All of these expert pilots have lost races far more times than they have won. None of them gave up after a loss. The same holds true for us, both personally and professionally. We “don’t want to quit before the miracle happens.”

Just for fun, be sure to check out the two videos below. The first one is a quick overview of the race I mentioned above. The second has commentary by pilots. To those who will ask me how the videos are related to print finishing work, I have something of a Zen answer. They have nothing to do with bindery work, or everything to do with it. It all depends on how you look at life.

For your viewing pleasure, be sure to watch the videos in full screen mode.