Fold Plate Installation – Is There a Better Way?

One of the most useful questions we get is when someone asks us to settle a dispute about the right way to do something on a folding machine. A Bindery Success™ Blog reader recently asked us to settle a discussion in their shop about the correct way to lock a fold plate. This sounds easy to answer, but let’s take a look.

Some folding machines, especially many older ones as well as table-top or other similarly small machines have fold plates that simply latch into either open or closed position. It’s in the right position or it’s not. The folders we’re talking about today use an eccentric cam to lock the plate into position.

The animated photo at right shows how these simple cams work. With the upper plates there is almost never a problem locking the plate. Gravity works in our favor by pulling the heavy plate down the rails into the right position against the stops. The cam easily prevents any movement.

On the lower plates we have two things working against us: 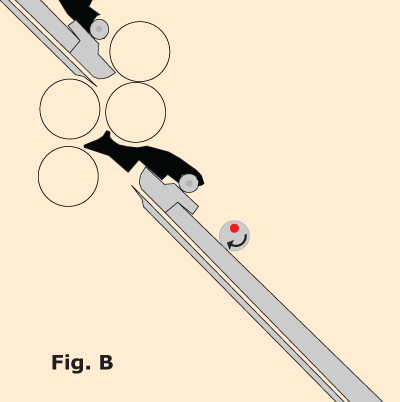 The two partial diagrams here are exaggerated a bit for illustration purposes.

Fig. B shows the cam action which results from the most common way of locking the plate. If sufficient force isn’t used when you lock it, gravity and folding forces conspire to gradually rotate the eccentric loose. As the plate drops away from the fold rollers, this in turn affects your folding, scoring, perforating, or trimming, and can also cause jams.

Fig. A illustrates the cam action when you rotate in the opposite direction. In this case, gravity and folding forces will only serve to make the cam rotate in the direction that increases the locking action. For all practical purposes, the plate isn’t going to move at all. The downside to rotating the eccentric in this direction is that the locking action can actually pull the plate away from the fold

rollers ever so slightly if you are not careful. If that happens you might lock one side into position lower than the other.

So which way is correct? I polled a few folding machine technicians for their feedback and experience.

If for any reason you want to be absolutely certain that the fold plate remains fixed in position, the consensus is that Fig. A is best. The downside it that you must be sure that the plate remains fully against the stops as you rotate the eccentric to the locked position. Remember, the eccentric rotation wants to force the plate away from the stops while you are simultaneously trying to hold it in. So you must be mindful as you do this.

If you are using a pneumatic gate-fold plate or an automatic fold plate, this is the recommended method. In either of these cases, a fold plate that drops out of position can cause expensive damage to the gate fold or automatic plate mechanisms. In addition, the repeated motion of the tucker blade in a gate fold plate is one more contributor to the loosening of an eccentric locked as in Fig. B.

As you might guess, there is always more to the story. In my experience, most operators are taught to use the Fig. B method for two reasons. First, it seems to be an intuitive motion and most machines seem to be set up that way. Next, you don’t have to worry about the locking motion itself pulling the plate out of position. Generally, this method doesn’t lead to problems. So it becomes an unquestioned habit.

To further complicate the answer, one folder technician even found a compromise recommendation in an MBO B26 instruction manual. It recommended using the Fig. B technique for upper plates and the Fig. A technique for lower plates. Since most guys rarely read through an instruction manual, (including me) such a recommendation will likely be missed. Unless of course, a technician points it out during a service call or initial training.

We might not have settled any arguments today, but I think we can walk away with a few useful conclusions.

Use common sense. If you use the Fig. B method and you never have a problem with paper jams and wandering registration, then there is probably no need to change. But if you find loose plates to be a regular or even occasional source of problems, it’s time to re-think your technique.

Use visual cues. Good folding machine operators position the locking levers so they get an instant visual clue about whether a plate is locked correctly. If every lever is in a different relative position while in the locked position, (such as in the photo upper right) you lose a good visual indicator. If every lever is in precisely the same position when locked, (photo lower right) you have an instant visual clue. 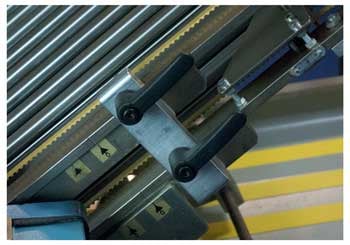 Use what works best. Every shop has different needs. When you question everything and have a mindset of constant re-evaluation, you’re on a path to continuous improvement.

Make it systematic. It’s a tough task, but if you come up with a good system, be sure that it’s universally adopted among all your operators.

Thanks to the folder technicians who responded, including Dave Double of Double Equipment. And thank you Karl Houser of BRD Printing for bringing this lively discussion to our attention.

Please feel free to share your experiences and stories below!