My first experience with folding machines could have taken place in a museum, considering the age of the bindery equipment

antiquities used in my training. One was a Dexter-Cleveland (Model M shown at left) and the other was a small pile-fed Baumfolder. The Dexter was as tall as I am and loading paper was a workout that required climbing two steps to reach the infeed. My legs never let me forget a day of up-and-down on that machine. Our bindery mechanic never could figure out exactly how old the folders were but felt they dated back to the 40’s. 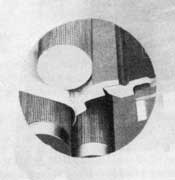 To add to the challenge, the fold rollers on both were made entirely of knurled steel. (right)  At the dawn of time when these folding machines were made, this type of roller worked just fine. As paper coatings became smoother and offset lithography advanced with heavier ink coverage, coatings and varnishes, folding on a vintage machine was a struggle. While the pressmen celebrated the installation of a brand new Miller 5 color perfector in the early 80’s, I wondered how on earth I’d ever be able to fold the slick brochures coming off the press at twice the speed of the older presses.

That’s when my folder guru/trainer pulled a roll of gray tape (probably Tesa®) from his black bag and cautioned, “Hide this away—it’s expensive but it’s the secret to folding coated jobs on these machines. You apply it to the fold rollers like this…” He was right…it would indeed do the trick on many jobs but too many others went upstairs to our local trade bindery.

In time he upgraded the Baum with new grooved, urethane rollers which worked like a charm—no more tape. The Dexter rollers got an abrasive coating which worked temporarily and in short order wore down to the old steel surface. Even with the sandpaper-like coating, tape was required. Within a few years our bindery got up to speed with a new MBO 26” 4-4-4 folder with spiral combination fold rollers and a much newer Baum with combination rollers. Life was good.

Tape usage declined but occasionally a folding job would give us a fit and out came the tape. Like rubber band or paper clip remedies, some things should always be kept in our bag of tricks. Reno Cyr, Sr. of JS McCarthy and a regular bindery tip contributor wrote recently to suggest using Gaffer’s Tape for these special occasions. Even with running state of the art bindery machines in their bindery, Cyr occasionally sees the need for this classic fix.

He uses a Shurtape® P-665 cloth tape that is durable, grips the paper and doesn’t leave a residue on the rollers. At about $10 a roll, it’s also a fraction the cost of the premium Tesa®.  While we haven’t done any scientific comparisons, the Tesa tapes are engineered for specific applications and work extremely well when you need grip! The Gaffers tape is more an all-around solution and if you louse up several feet of tape, you don’t mind so much throwing it out to start over.

With modern folders and the variety of advanced fold roller designs available, the need for tape usually arises in specialty applications or extremely difficult folding jobs. For instance:

One other advantage of the Gaffers tape according to Cyr is the ease of tearing off strips without any tools—pretty handy when you’re on your back under the folder.

With advances in bindery equipment, I became less of a fan of the tape, especially if I used the wrong type and had to spend an hour afterwards cleaning rollers. Or perhaps it was the offhand comment, “we just spent $80,000 on that new folder and you’re using tape?!?” But it didn’t stop me because I’ve also learned that no matter how well you think your jobs will run, some day you’ll find yourself searching for the roll of tape at the bottom of the parts drawer. If however, you find yourself using fold roller tape repeatedly, it's time to talk to your folder technician...either the rollers are worn or it might be time to upgrade to rollers more suitable to your jobs.

Sadly, the antiquities I learned this craft on were sold for scrap. In hindsight it was a fantastic way to learn the concepts of folding machine operations. If I didn’t set the fold rollers exactly right, the job wouldn’t run. (There were no calipers.)  If I didn’t understand the concept of how that folded piece was to move through the rollers and fold plates, I couldn’t set the rollers and plates. (There was no auto-set feature.) The only things electronic were counters (which were new at the time.) The Dexter continuous feeder was an ingenious Rube Goldberg device (Google him, youngsters) constructed of dozens of intricately linked parts which when adjusted and balanced just so, would precisely feed and fold one sheet after another, all day long…up two steps…down two steps…pick up a lift…up two steps…down two steps.

Feel free to share your experiences, comments and suggestions below.