Dog ears can be a thorn in the side of folding machine operators. Sometimes a simple turn of the dial to adjust the inside panel fold length is all that’s needed to fix it. Other times it seems

nothing will work. For some it may feel like it is a conspiracy with everyone from the designer through the press room participating, to see how creative, clever and experienced the operator really is. In true adherence to Murphy’s Laws, the problem was always at its worst when there was the least amount of time to fix it. 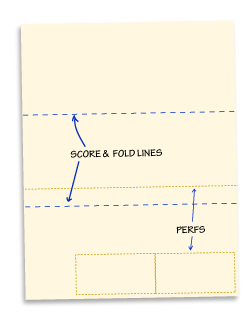 Brian Dickson of Gazette Printers ran into a dog ear problem running what should have been a routine 8.5x11 letter-fold piece on 80# Cover. The problem arose when the guillotine cutter operator mistakenly trimmed half the job so the inside panel was 1/8” too short. The job was also pre-scored and perforated, making it impossible to cheat a little here and there by moving the folds around. The end result: severe bent corners, also commonly called ‘dog ears’.

Dickson tried all the usual and unusual solutions on his MBO and Baum folding machines. He also tried one of our favorite techniques, described in detail here in a previous Bindery Success Blog article. The technique described in the article works like a charm for most dog ear problems.

In this case however, the problem was made worse because the sheet had several perforations as shown in the diagram. The perfed boxes at the bottom of the sheet (the inside panel) made it difficult to manipulate that panel without ripping the perfs.

Next he decided to try something you might not normally try on a letter fold. Dickson set up his Baumfolder so the 8 page right angle section was running straight out from the parallel section instead of at a right angle. (drawing at lower right) Fold #1 was done in the first unit and fold #2 in the right angle unit. He hoped that by doing this, the first fold and inside panel would be flattened just enough to make the second fold possible.

The technique worked and they were able to finish the job without dog ears and without ripped perforations! There were probably two things at work here.

In any event, it worked. Doing the two folds in two separate sections obviously increased the factors at work on the sheet. We know that extra time and distance traveled in a folding machine means there are more opportunities for scratching, scuffing, and jamming. Usually we try to avoid doing this on folders and most other bindery equipment. Yet in this case, it proved to be the perfect opportunity to eliminate the problem. That’s something to keep in mind when you’re faced with your next ‘insoluble’ folding problem!

Thank you Brian for submitting this tip. It’s another great illustration of the inventiveness and persistence that are the traits of good bindery equipment operators. (Last week’s article touched on the same subject with a clever folding solution submitted by another Bindery Success™ reader. You can read it here.)