What Is a Micro Perforation?

Some time ago a Bindery Success™ reader asked us to referee a disagreement about the correct usage of the term “aggressive perforation.” He believed a more aggressive perf would tear more easily. His colleague thought 'more aggressive' meant it would be harder to tear. Who was right?

The English language is difficult to master. Just ask anyone trying to learn it. The perforating question shows how any given phrase might be open to interpretation unless as the French say, we use le mot juste (the exact word) to describe precisely what we mean.

Where there is vagueness, there is a need for more precise expression. In the case of the aggressive perforation, a single phrase has come to have opposite meanings. This could lead to disastrous results if print finishing instructions or changes are being given for a particular perforating job.

We get plenty of questions and statements about perfs. Like many terms and practices, customary industry usage is passed around, defined, and re-defined. And as we see, the same phrase can come to mean entirely different things depending on where it was learned.

In the spirit of precision, here are some terms which should help us all to better communicate what we are actually trying to achieve. This should shed some light on whom, if anyone was right about their usage of the term “aggressive.”

Perforation is defined for our print finishing purposes as a series of small holes in a substrate such as paper or cardboard.

Micro Perforation isn’t defined in the dictionaries we have. “Micro” however, is defined as “very small,” which leaves us with a definition of micro perforation as a “series of very small holes in a substrate.” How’s that for a very subjective and relative term?! In the packaging industry, which deals extensively with a nearly infinite variety of perforating rules, a micro perforation has come to be known as a perforation in the 15 to 20 teeth-per-inch range, or higher. 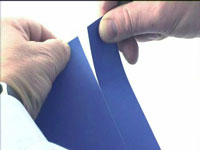 Burst Strength is the “maximum uniformly distributed pressure, applied at right angles to its surface,” that a single sheet of paper can withstand under test conditions. Related to this is elongation, or how far you can stretch a piece of paper before it ruptures. (From Sappi Paper, Paper Standards & Measurements.)

Tear Resistance is defined by Sappi Paper as the “force required to continue the tearing of an initial cut in a single sheet of paper.”

Stiffness or Rigidity is the paper’s resistance against bending. This will affect any folding operation, including a fold on a perf.

Teeth Per Inch (TPI) is the number of cutting teeth per inch on a perforating rule or rotary blade. Using a tpi designation helps to standardize any discussion about perforating requirements. However many folding machine and scoring machine perforating blades are referred to by the number of teeth per blade. To get a tpi number, use the formula π × diameter = circumference. For instance an 82 teeth blade with a 60mm (2.36”) blade diameter:

With a TPI designation, you can start comparing perfs using the same language.

Ties (sometimes called gullets or spaces) are the spaces between the cutting teeth on the perforating rule or blade. They are called “ties” because it is the uncut portion of the sheet which ties the two halves of the sheet together.

Let’s return to the original disagreement. When you perforate a sheet of paper, you are partially cutting the sheet so you are reducing the burst strength and tear strength. The strength of any given perf configuration is usually expressed as TPI X Tie Width = Percent of Hold. Changing the tpi and tie width will change the strength and tear resistance of the perforation.

Performance of any perforated paper is always subject to humidity, grain direction, inks, coatings, perf blade thickness, blade bevel, and more. The proper use of perforations can be tricky. In the packaging industry there is an almost infinite supply of various perforating rules available to match the almost infinite variety of substrates that need to be perfed. In the printing and quick copy industry, there are far fewer substrates involved. Generally a smaller range of perforating configurations will handle the perforating job at hand. Hopefully the definitions above will get you pointed in the right direction and prevent confusing discussions.