You can count on human nature being the same today as it was 100 or 1000 years ago, even in the printing industry. That’s why some of the oldest advice out there is still the best. Here’s a commentary on the problem of rush jobs in the printing industry that is funny and true. Well, maybe we have a strange sense of humor here at Technifold. We think that Gina, who runs Technifold’s sales office, speaks the way this fellow writes. That makes it funny. If you don’t believe me, you’ll just have to give her a call to buy something.

The piece was written by George V. Oremus in The Practical Printer…a print industry trade publication from 1910. 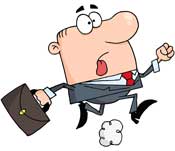 “The question of handling rush jobs is a very serious one, yet very few printers give it any attention whatever, seeming to overlook the fact that only a small percentage of this class of work pays at all. Indeed, it is a losing proposition every time unless it’s charged for a little above the regular schedule. And how many printers charge their little twenty per cent additional, or even a paltry ten per cent toll?

We all know that in the printing industry the rush job is ever with us; still the printer is largely to blame for this condition; and instead of trying to minimize the evil, the great majority of them seem to encourage the idea. The rush job can be classified under the beading of "Undesirable Business," and it is the experience of the writer this class of business is not to be encouraged, no more so than the use of the proverbial dutchman*, as they both go hand in hand toward the woeful destruction of material and the degeneration of the skillful workman.

This statement is not overdrawn; one has but to look about him to notice the specimens of modern printing constantly circulated to verify the assertion; and yet the printer seems to glory in telling the customer that "We can handle every thing on shortest notice."

Let us look at the question from another standpoint, and see if we cannot discover some of the leaks in the printer's profits: The composing room has long been the subject of controversy, and the average printer looks upon it as a necessary evil, yet heaps all kinds of obstacles in its pathway and endeavors to keep it permanently so, instead of trying to put it on the profit side of the ledger. The compositor who usually takes pride in his work is forced to turn out the rush job in record time, and not only slaps it together, but dumps a very poor specimen of the printer's art upon the stone.

Next, the pressman must degenerate himself; because the job is promised sure at such and such a time, which will not permit of even a thought of make-ready, so the job is "squeezed up," in pressroom parlance. This treatment of material soon tells; and in the course of a few years the establishment loses its prestige for fine job printing.

By catering to the rush element, the workman who takes pride in his work and who is anxious to advance, sees no future but his connection with a sloppy dump, and thus the shop is continually changing hands and the proprietors raise a howl that they cannot obtain competent printers, and their work is rapidly falling down both in quality and quantity, and they start in to figure on the cost of production. Many a sloppy shop owes its downfall to the rush job, and as long as printers will encourage this kind of business they must eventually bow to the inevitable — degeneration; and degeneration is a twin brother to stagnation, and we all know the relation the latter bears to the ever-ready sheriff.

The reason why so many printers will try to cut their own throats is a mystery. It can be remedied very easily, but not until the printer places a value on his work the same as the butcher or the groceryman does.

One writer says that the printer is the most generous man on earth, and I agree with him— in some respects. The rush job cannot possibly be a model of typography, and combined with poor presswork, the result spells ruin.

Perhaps some will raise the cry that the rush job cannot be entirely abolished, which it probably true; but it depends on how you educate your customers, Mr. Printer. Observe how the barber handles his customers; there is no rush or preference given; the customer must await his turn, unless he is so fortunate as to bribe some other customer, in which case he generally must pay for the privilege, or else do the work himself.

And here is where the printer still has the advantage; the customer cannot do his own printing under similar circumstances. True, he can take it to your competitor, which ought to tickle you to death, as nothing will serve to put him out of business more speedily than to handle the job under rush orders, or at a lower price than you figured; and in any event the best way to kill a competitor is to let him kill himself. As the age of the poorly printed job is rapidly falling to the rear, so the man that does the right kind of work at the right price is the one who will survive.”

Hear, hear! If you care to “degenerate” yourself (or us) with comments below, we welcome them.