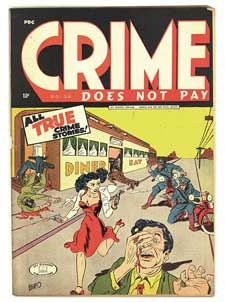 Here’s a bindery trivia question about trimming saddle stitched books that will get you thinking, bring you back to junior high school and probably stir up a little debate. A Bindery Success Blog reader sent us this photo in the hope that with all the experience out there, we could put to rest an argument he is having with a colleague. And it could even affect the value of the comic in question!

The image shows an old comic book printed in 1942 (left) which was stitched with just one stitch (a common practice in those days) and then trimmed. We also know it’s common to get chips and tears at the top and bottom of the spine during trimming. This occurs more frequently as the book gets thicker. Small books are also prone to this trimming problem.

In this case, there is a missing piece in the upper right corner on the face of the book. (photo lower left) This is where the debate starts. Our reader says, “I am of the opinion that this was caused during the printing and trimming process - that somehow the chip happened as the blade was cutting, but right at the end, the paper gave way at that point, before the blade could finish a clean cut…To my mind, it's similar to how tearing a perforated ticket can take a chunk out of one of the halves right at the end of the tear, or when tearing apart old perforated stamps and a chunk comes out of one of them at the end.” 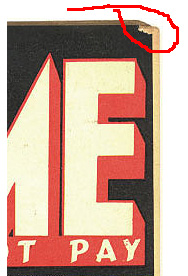 His colleague claims this is not possible during the folding or trimming process. Unlike the common chipping or tearing at the spine, he insists this must have happened after the comic was printed and put out for sale.

Presumably the source of the defect has little or no bearing on the comic’s value. It’s just one of those bits of trivia that collectors like to have in their knowledge bank.

I believe that while it’s unlikely for such a tear to happen during trimming, it IS possible. In my undocumented and less-than-scientific experience, I vaguely recall seeing such defects when stitching newsprint with a gloss coated, book weight cover.

So what do you think? Have you run across such problems in your saddle-stitched book experience? Or do you think it’s impossible for this to happen on a typical three-knife trimmer?

I don’t think we’ll ever be able to determine with any degree of certainty the cause of such a defect on a specific book. We’ll have to leave that to forensic scientists.

However, we should be able to at least determine if it’s possible…or not. Let’s hear your thoughts below. Maybe we can settle this for our comic collectors, once and for all.

If anyone has a photo of this actually happening on a job they’re trimming on their saddle stitcher, especially a comic book, I’d love to see it. Email me here and we’ll add it to this article if it helps to settle the argument!

(Please allow a slight delay for moderator approval of comments.)