Forklift Races in the Bindery

My first unforgettable exposure to the dangers of fork lifts goes back to before I ever set foot in a print shop. The experience was responsible in part for instilling the caution I later had when working around bindery and material handling equipment. 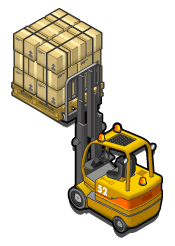 I was working a summer job in the warehouse of a busy lumber yard. Delivery truck, forklift and pedestrian worker traffic all mixed together freely at a fast pace. Whatever your job, you really had to watch what you were doing and where you were going.

One hectic day our safety-minded foreman started jumping up and down, wildly gyrating and cursing. A passing forklift had just run over his foot. Luckily his steel toed boots did their job and he suffered only a bruised foot and damaged ego.

Later that summer a newly hired young worker was not so lucky. During his second day on the job and first day driving the forklift, he flipped it on its side. This time it was serious. Head injuries required helicopter transport to a trauma center. That was the last we ever saw of him and although he lived, I don’t believe he was ever able to work again.

I witnessed plenty of close calls in various print shops. There were forklift races while the boss was away, heavy skids of paper dropped from on high, holes poked in office walls or in trailers and collisions with presses or bindery equipment. There was the time (or two) when a new hire, helpfully stacking paper to the ceiling, hit the sprinkler system. This brought every fire department in the city and shut down operations for hours while the crowd of firemen, police, city inspectors and the plumber re-set and checked the system.

The last thirty years have seen a decline in injuries through better education and training for new forklift operators. Most printing businesses these days are very conscientious about training on this and other types of hazardous press and bindery equipment, whether of their own accord or because of the specter of OSHA enforcement.

One thing about forklifts that flies under the radar is the potential for injury when pedestrians are present, be they employees or visitors. It's not too surprising that forklift-pedestrian collisions are a leading cause of injuries in general industry. While drivers are responsible for operating safely, pedestrians have to do their part as well. In this case, safety is a two-way street.

A 1994 Bureau of Labor Statistics compilation of several years of data revealed that 42% of forklift related fatalities occur when a worker or pedestrian is pinned between objects, struck by material or struck by the forklift. The study doesn’t say who was at fault in these instances but the facts emphasize the need for pedestrian awareness.

Although such fatalities are on the decline, it’s definitely still an issue. For industry in general, forklift incidents rank #6 on the top 10 list of most frequently cited OSHA violations and #5 on the list of top 10 highest penalties assessed. For commercial printers it’s higher than average at #4, with penalties averaging about $1,000 per citation.

With that in mind the National Safety Council has some suggestions for pedestrians:

Drivers know their responsibilities. In general, they drive at safe speeds, watch for pedestrian traffic, and stack loads to avoid blind spots. But a visitor or temporary worker at your facility is probably not aware of how careful they need to be.

If your plant is particularly busy, it’s a good safety policy to always send an escort to keep your visitor out of harms way. It helps also to explain to the visitor the rules that are to be followed while inside your plant.

Of course there is a lot more to forklift safety than we can include here. You can download more forklift operating guidelines and safety tips here in this free pdf, compiled from years of case studies by the National Institute for Occupational Safety and Health.

As an old pilot saying goes, “safety regulations are written in blood.” Certainly we don’t like to be ‘regulated’ or told what to do. (At least I don’t!) So I think of regulations in human terms. Each regulation is there because someone suffered or died. The least we can do, if it applies to our job, is pay attention to why it might be there and let it guide our daily work habits.

Please feel free to share your forklift safety stories, comments or suggestions below!