Does Your Bindery or Finishing Department Have a Robot in its Future?

It took a while to sink in but eventually I realized that one of the reasons I was hired for my first job in the bindery department of a commercial printing company is that there wasn’t exactly a waiting list of people willing to do the work.  As interesting and varied as the work 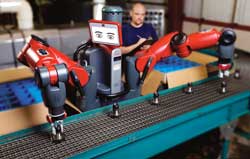 can be, there were times when it was monotonous, tiring and a little tedious.

It was during those times I would mentally construct machines that might do the work automatically. Most of my imaginary engineering was Rube Goldberg style contraptions rather than any type of sophisticated bindery assembly machinery. But that’s probably because I took my cue from the bindery equipment surrounding me.

Sure, you could automate almost any bindery process but at what price? Such cost prohibitions may all change if a company called Rethink Robotics is successful with a new robot named Baxter.

According to the company, Baxter was designed to handle tasks that until now haven’t been economically automated. In this way they believe small manufacturers will be able to compete with low-cost offshore labor, keep more tasks in-house and stay competitive and profitable.

Some of the tasks it was designed for include:

It sure sounds like bindery assembly and finishing work to me!

The big attraction with Baxter is that non-technical workers can ‘train’ it. Conventional industrial robots require programmers for every task but Baxter can be shown a task just as you would physically show a person. In other words, a bindery worker assembling a product could show Baxter (or a team of Baxters) how to assemble something simply by guiding it through the motions.

Baxter is also a fraction the price of conventional robots, coming in at $22,000, complete and ready to work. Rethink says that the self-contained Baxter can go from shipping box to production in less than an hour.

It’s apparently safe too. It senses when humans are around and slows down in their presence. If human contact is made during motion, it will stop until the person moves out of the way.

Baxter will begin shipping next month, so I’m eagerly awaiting reports from any printers or binderies out there who might add one to their staff. Now I don’t think people can ever be fully replaced by robots. I see robots as fantastic tools to be used to make our businesses more competitive and our lives easier.

One thing I know is that I must have one of these for the home. I don’t know why yet, but it’s on my Christmas list.