Double Gatefolds on the Buckle Folder - 3 Tips for Boxed Folds 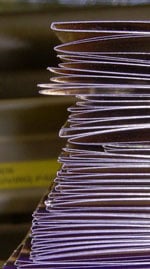 If you produce double gatefolds on your buckle folder, you might have struggled with the ‘boxed’ fold as shown in the photo (left). The problem is obvious in that the first fold is squared off and boxy rather than flat and sharp. Several readers recently emailed asking how to solve this problem, especially when folding text weight stocks.

Gatefold plates are widely available for a variety of folding machines and they all work by deflecting the partially folded sheet so that the two ‘gate’ panels remain closed until the final fold is made and the sheet begins to enter fold roller #5. 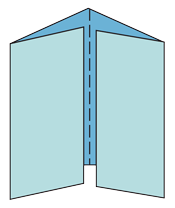 Without the gatefold plate, the final fold will probably take place but one of the panels will open up as it exits plate #4.

As David Double, founder of Double Equipment explains, the job of the gatefold plate is to “fire just as the first panel tries to enter the gate fold plate.” This in turn causes that panel to lag behind ever so slightly, just enough to create a slight bow or bubble in the panel as it begins to round fold roller #4.

As the lead edge of the final fold enters fold roller #5, air is now trapped in this bubble. Moving through the fold roller and subsequently the slitter shafts, this air bubble squeezes the first panel backward, resulting in the ‘box’ fold shown in the photo.

You can also offset the pull out wheels so upper wheels don’t touch the lower, thus removing that variable entirely. Leaving the lower wheels in place will probably be sufficient to drive the sheet into the delivery.

Naturally the folded piece will be spongy but that’s an easy fix. One way is to compress the folded brochure by hand and/or use a banding press. Another way is to use a right angle section running straight out from the first section. Close off all the fold plates in the right angle and run the gatefold piece through to flatten it out.

According to Double, this technique has served his customers well for more than 30 years since his first service call regarding this problem. Thanks also to Paul Barrett of Tech-ni-fold Ltd in the UK, another experienced folding machine veteran, for his input on this problem.