Judgement Day in the Bindery?

The package on my desk was odd in that there was no letter enclosed, just the word "really?" scrawled on the envelope in which our catalog had been 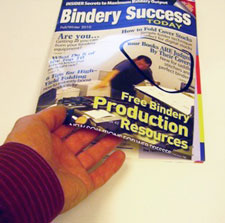 returned. The headline "Your books ARE judged by their covers!" was circled on our cover. (photo at left)

I'm well aware that a catalog mailing might be ignored or put on the shelf by most people. But re-packaged and shipped back? That took some effort, so of course I was curious. The reason for the return was immediately self-evident. The cover didn't line up to the head when stitched, resulting in copy trimmed off at the bottom and a short cover at the top.

Let's just say that in a catalog titled "Bindery Success™" this could be a credibility killer! Did the stitching glitch have anything whatsoever to do with our tools? No. Not a thing. The circled headline referred to the page about creasing tools for saddle stitching and perfect binding machines. Did we lose a chance at a new customer? Probably, but can you blame them? You never get a second chance to make a first impression, or as Cervantes said in his novel Don Quixote, "By a small sample we may judge of the whole piece."  We had been judged and found guilty!

It's inevitable. When you put yourself 'out there' you'll take a few hits now and then, no matter how hard you try to cover all the details. We use the name Bindery Success™ on our catalog because it perfectly reflects our mission at Technifold USA. It neatly sums up what we're all about and we believe in it with all our hearts.

Yet every mistake is an opportunity to learn something, and this one had me wondering about a few things. First, it proved my point perfectly...every book (and I mean EVERY single book) is indeed judged by its cover. So pay attention to your covers, in both printing and binding!

Secondly, was it really a mistake? Or should it be considered fallout from an acceptable level of defects? If it is a mistake, then whose mistake was it? Was it mine because I didn't ask for a comprehensive inspection that would insure zero defects in the catalogs? Was it mine because I didn't do an inspection myself? Should I even have to do an inspection? Was it the printers because they let at least one bad book go out the door? We use a couple of print vendors who have done great work for us for a lot of years. Would I really dare to complain about one bad book (that I know of) out of the thousands printed?

Maybe I sound like Andy Rooney with all these questions, yet it's never a good idea to ignore a mistake in business, no matter whose fault it is. As Confucius said, "To make a mistake and not correct it--that, indeed, is a mistake." Rather than fix the blame, we prefer to fix the problem when we encounter one.

What have I learned? Next printing I'll ask for a closer inspection, probably with a re-telling of this story to illustrate my reasons for doing so. It also confirmed that I should continue to take risks and put us 'out there' on the line. As Nobel Prize-winning physicist Frank Wilczek said, "If you don't make mistakes, you're not working on hard enough problems. And that's a big mistake."

Finally, thank you to the gal that took the time to send this back to us...we appreciate your time and effort! As always, we welcome your comments and experiences with mistakes below.