Once upon a pre-digital time when the lumbering offset lithosaurus ruled the earth, scoring text weight (book weight) papers was uncommon. If it cracked when folded, perhaps a press score was added and rarely a folding machine score. Sometimes the cracking issues could be designed away and other times a different choice of paper and/or grain direction made all the difference.

As quality evolved, things that were acceptable one year were candidates for rejection the next. And of course the introduction of digital printing with toner on dry, brittle sheets, meant the bindery person had to work that much harder to fold an acceptable text-weight job.

The good news with a lot of the text weight digital stocks is that they are often a little bulkier than some of their offset brethren, which makes them easier to crease successfully. You may find for instance, that creasing (or scoring) a 70 or 80# C2S offset litho sheet may reduce cracking, but not eliminate it entirely. In the digital world however we routinely see customers successfully creasing equivalent digital stocks (and lighter) with much better results than with the offset litho paper. It's sort of an opposite world, you might say.

There is however, a trap to avoid when creasing or scoring light papers, whether digital or offset. If you are scoring and folding in a single inline operation you don’t have to worry about this because you get instant feedback on the quality and location of the crease. If your shop has limited equipment and is creasing in one operation and folding in a separate operation, then beware.

The trap is that you crease an entire job and put it on the folder only to find it doesn’t want to fold in the same spot as when folded by hand. The folder exerts force differently than the way your hands do. The difference is usually small but it can be enough to ruin the job, especially if you have more than one crease or score involved. A 4 page brochure would be easy to fix, typically with a trim off one side or another. A letterfold could be a different story, especially if the front panel is too short.

The solution is simple. If at all possible fold some test sheets on the folding machine before you crease the entire job. It could save a lot of bindery time and aggravation. 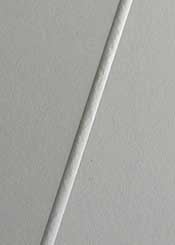 The reason simply put and without going into elaborate detail, is this: Creasing works by compressing and internally delaminating the sheet with the use of male and female components such as our EZ Fit and Fast Fit Tri-Creasers. This delamination process gets more difficult for sheets less than .006” thick. There’s less material there to delaminate, and even the narrowest creasing components can be too wide for the paper being creased.

The net effect is that the actual fold will take place at the weakest spot on the crease. If for instance, your female channel is .030” wide, your actual fold will fall somewhere in there, but only the machine will tell you exactly where that’s going to be. It will probably tend to fold on one edge or the other of the crease, but it can happen anywhere in between. That +/- .015” in either direction is significant when it comes down to the actual fold. We do realize this doesn’t happen every time, and it may never have happened to you. But, it’s just not something that you want to take for granted, especially if you are working with a new stock, or if you are accustomed to creasing only cover stocks. Folding the test sheets will be well worth the small amount of extra time.