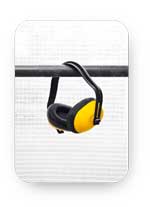 What do bindery equipment, loud music, gunshots and power tools have in common?

Exposure to them can cause hearing loss and tinnitus (ringing in the ears.) Some day…maybe…I’ll tell the story of how long ago I had an experience with all four during the course of a single day at work.

One of the leading causes of this preventable problem is the failure of staff to wear hearing protection, according to the Centers for Disease Control. About 1 in 22 people are afflicted with tinnitus and according to surveys by the CDC, about half of these workers are in manufacturing.

In these days of OSHA oversight, most printers have hearing protection readily available but if you don’t use it, it doesn’t do any good. While damage to your ear can occur with a single loud incident, initial hearing loss is not usually noticeable, and the symptoms are more likely to appear in a gradual fashion.

I know this from personal experience. In my early 20’s I was fortunate to be employed in the bindery department of a New York commercial printer. I vaguely remember seeing the hearing protectors somewhere in the shop, but I was 20-something and it didn’t look cool, they were hot and I had to constantly take them off to hear people talking. So I’d cut and fold all day, with the protectors hanging off the folding machine. Hey, at 21 we are invincible.

My real mission at the time was playing in a rock band at night—and you definitely did NOT wear hearing protectors when playing at CBGB or anywhere else in New York City. So I’d get 8-10 hours of ear-pounding noise by day, and most nights between rehearsals or playing out, a couple more hours of heavy auditory pummeling.

Noise gets uncomfortable around 80 decibels (the sound of heavy traffic up close) and is dangerous from around 90db and up. Folding machines, presses and compressors easily generate in excess of 85db. Rock concerts can produce 100-110db. Not surprisingly, prolonged, regular exposure to dangerous levels will cause permanent damage. A rule of thumb is that if you have to speak loudly or shout to another person to be heard over a noise, the noise might be damaging.

I didn’t even know I had hearing loss until a hearing test revealed it many years later. Occasionally there would be a ringing in my ears but it always went away so I didn’t think much of it. Until one day the ringing stayed….and steadily worsened. The noise varies with individuals, but I can best describe mine as the sound of two very high-pitched, dissonant tuning forks combined with the buzzing sound of cicadas. Volume varies but it’s always there, 24-7.

Some months later a hearing specialist explained everything I ever wanted to know about tinnitus and how now that I had it, there wasn’t any known cure for it; there is only prevention. Yes, I can get these high-tech noise-cancelling hearing aids that would cancel out the noise but right now the remedy seems worse than the ailment.

So at the risk of sounding like an old-timer to the young bindery workers out there, I’ll issue this warning—wear your hearing protection starting today. For you fellow sufferers, there is a lot of advice out there on how to live with it, including recommendations on minimizing it. Do they work? It’s hard to say because the noise never goes away. And there’s no way to quantify what we hear, or to say that it’s ‘less bad’ than it used to be.

The one recommendation I can’t bring myself to try yet is to stop drinking caffeinated beverages. I exercise, eat OK, don’t smoke, don’t drink, and my weight is good. But life without coffee?? That just wouldn’t be life… And if I can’t tell the story of loud music, gunshots, power tools and bindery equipment over a cup of coffee, well then, I just can’t tell the story.