A Bindery Success™ reader recently sent us a story that illustrates the sometimes amusing difficulties of troubleshooting bindery work. In this case they were saddle-stitching a book with a reply envelope inserted between the pages. Stitcher operators

know it’s a bit of a tricky job. It’s a delicate operation getting the envelopes to feed accurately, to remain in position, and to remain in the book so as not to cause rejects. Yet once the feeder is set correctly it tends to run all day without problems.

Such was the case this particular day. Charlie, our reader, says the envelopes were running beautifully for about forty minutes.  Suddenly, for no apparent reason, they began dropping on the floor. Like most experienced operators, he began checking his own setup of the machine to make sure nothing had come loose, had broken, or had been set incorrectly.

Since the machine seemed to be set perfectly, he began inspecting the envelopes. Perhaps glue had fouled the envelopes, preventing them from opening properly. Perhaps the folding was starting to vary more than normal. I’m sure he probably also observed how the operator loading that feed pocket was doing her job.

After much troubleshooting and head-scratching time, Charlie realized that one of the helpers, feeling a bit warm, had turned on a fan and aimed it right at their legs. The resulting turbulence was preventing the envelopes from dropping properly on the chain. As soon as the fan was switched off, the delicate balance was restored and the stitcher continued to run beautifully!

The story shows how a single troubleshooting event can be simultaneously complex and simple. It’s simple because the solution involved the single act of turning off a switch or moving the fan. It’s complex because there are human beings involved with the operation of a machine.

Both machine and human had to go through the troubleshooting process. Yet the solution, I’d have to say, is “out there.” Think about it this way: if you were creating a thorough checklist for this specific type of saddle stitching operation, would you ever consider adding “Check that no fans are blowing on operator’s legs?”

Bindery equipment work can be very complex due to the number of variables involved with nearly every job. There are however, some popular rules of thumb and ways of thinking that help in our troubleshooting efforts.

We’ve talked about using the 80-20 Rule in our ebook How to Get the Most from Your Folding Machine Operators. In short, it means 80% of problems are the result of only 20% of possible causes. In other words, a few vital things, if not properly done, will cause the majority of problems that arise.

Of course we have the KISS rule: “Keep it simple stupid.” The KISS principle was first used by Kelly Johnson, an engineer with Lockheed. It’s important to note that his use of the phrase differs by a single comma from the popular "Keep it simple, stupid."

In other words, there was no reference to anyone being stupid. Quite the opposite. He was trying to inspire his team of engineers to design systems that seemed both “simple” and “stupid.” Their sophisticated jet fighters had to be repaired in the field, in combat conditions, by the average aircraft mechanic. Essentially he needed extraordinarily intelligent systems that could be taken as 'stupid' because of their simple design.

From the viewpoint of troubleshooting bindery equipment, the KISS rule might mean that we look first for the simpler solutions to a problem. Don’t rebuild the machine at the first sign of trouble. Look for the “fan”. 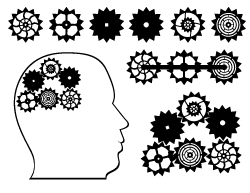 Which brings us to another related way of thought called Occam’s Razor which states that “Entities should not be multiplied unnecessarily.” In the realm of scientific thought it came to mean that if there are two or more explanations for the same prediction or hypothesis, the simpler one is preferred and more likely to be correct. You can see in our saddle-stitching example that this was certainly the case.

Although these concepts can save us a lot of time, there is one important thing we should not forget during our troubleshooting efforts. Humans are involved. We are as complex and unpredictable as it gets. That's why economics or social studies can never be true 'sciences', no matter how many PhD's are awarded. All it takes is one human being acting differently than predicted and a whole hypothesis is kaput.

Aristotle said that nature operates in the shortest way possible. If that is true, then one of the best things we can do to aid in troubleshooting is to let our minds remain open. Let our subconscious minds pick up some of the thinking for us. Certainly that’s what happened when Charlie had the “realization” about the fan. It wasn’t on his list of active things to troubleshoot, but his open mind meant it could pop to the surface. In a sense, nature did its work.

If you want to become a good bindery equipment operator, then keep an open mind. It might be just the thing that bails you out of a difficult problem.