How to Get Better Register on Your Multibinder Collator and Stitcher

A recent email caused a bindery flashback, uh…I mean memory…about a piece of bindery equipment that I hadn’t thought about for years. Perhaps it was the stress of running that machine more so than the passage of time that banished the experience to the far corners of my memory. 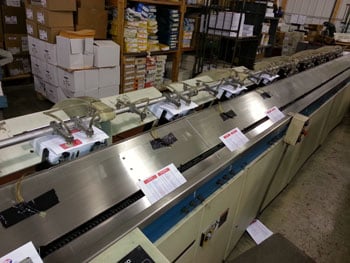 Brian Dickson of Gazette Printers submitted a clever tip on how to fix a register problem on the Harris Multibinder. When he found out I was a one-time Multibinder operator he said, “I love talking with other Multibinder operators because we have many war stories.” From the sound of things, we might be better off starting our own support group!

In all fairness I shouldn’t be so harsh with the machine. When I was running one, we used it for something it was NOT designed to do. My job was to soft fold a saddle-stitched 11 x 17” tabloid in half for mailing. The Multibinder was designed to feed flat sheets, not stitched books!

When I arrived as a new-hire at this shop, no one else wanted to run this job. The plant manager was doing it so I was ‘volunteered.’ Always eager to learn a new machine, I read the manual that night and from that point on, I believe the machine was all mine. We did this publication every month and somehow we all managed to make it work, despite frequent protests from the machine.

For those of you not familiar with a Multibinder, it is actually an impressive, versatile machine. It’s also big, at up to about 43’ long when equipped with 17 pockets. It collates flat sheets and then depending on what the job needs, can either saddle stitch, side stitch, corner stitch or collate only. Saddle stitched books are then folded and face trimmed, all in line. When set up correctly, it will do a great job.

The primary benefit to this bindery system is that sheets didn’t need to be folded before stitching. Cut the sheets, feed them flat and you end up with stitched books. (Search ‘Multibinder’ on Youtube if you want to see some machines in operation.)

The drawback is that the flat sheets must be trimmed precisely the same size and must register perfectly throughout the collating and stitching process. If the flat sheets are inconsistently trimmed, there will be variations in folding and stitching. If you have a lot of signatures, one or two incorrect cuts will make for some very sloppy looking books.

The principle of operation is simple. Feeders drop flat signatures onto the conveyor tray in front of pusher fingers. These fingers are attached to a chain which is continuously moving. As you might imagine, there can be quite a bit of vibration and movement happening. Sometimes sheets won’t jog up to the pusher correctly or they vibrate away from it as the chain moves.

When the collated flat set reaches the stitcher, it must be perfectly jogged before the shuttle grips it. If not, the stitches and fold will be wrong. If it’s bad enough, you get wicked jams in the folder which seem to take forever to clean up.

Naturally, Dickson was looking for a way to prevent the variation in register as the sheets move along the conveyor tray, also called a raceway. He ran into problems running 16 page books made up of 4-page flat signatures and noticed that two items stood out:

Changing machine speed sometimes helped but in most cases it aggravated the problem. He also tried the manufacturer recommended brushes to help with jogging but these too often made a bigger mess of things. If the sheets had any up curl, they would catch on the lead edge of the sheet and flip it over or jam it against the pusher finger.

His solution is simple. The center blower tube from each pile feeder is pulled from the pile feeder. It’s then repositioned as shown, right on the raceway, to create an air jogging system at each feeder station. The air blast separates the sheets and keeps them in position or blows them back into position if they are out.

In case you’re wondering, the missing air tube doesn’t affect pile feeding because he is usually doing this with smaller books. There is sufficient air separation to permit proper feeding with the remaining hoses.

Since first using this trick, Dickson says things have gone smoothly and he’s minimized his register problems. Although this tip is for Multibinders, I’m sure it would be effective on any type of collating machine that uses a conveyor tray or raceway, especially if you're running light stocks. There are some Didde Gather-All, Ehlerman, and Theisen & Bonitz collators and gatherers that use raceways similar in concept to this.

If you were motivated, you could build a system using Loc-Line or other flexible tubing and connectors. But there’s something more elegant, in a way only a bindery person can understand, about using duct tape, rubber bands and WD-40 to get the job done. And you don’t have to worry about getting an impossible purchase approval from those that control the purse strings.

Have a Multibinder war story? Please share it below!

Or use the social buttons to share this article with any suffering Multibinder operators you might know.