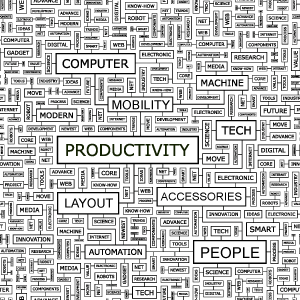 The one unchangeable fact about print finishing is that there is always a need to find ways to be more productive with what you have on hand. Deadlines can change, workloads can overwhelm without notice, and new equipment can force changes to old operating habits.  Whether your equipment is old or new, here are six areas for study that can yield some surprising improvements in productivity.

Plant layout is vital to getting maximum productivity from your bindery equipment. Print finishing departments typically have a LOT of material moving through them. The wrong layout can decrease average yield and even cause bottlenecks. Yet once we get all the machinery in place, we tend to forget that most of it can be moved if needed.

I recall staring down such a problem some years ago in my then-new job as bindery supervisor. The bindery work area was choked by a mountain of partially finished tags and labels piled high on various work tables and skids. It was a struggle to cut and ship the daily quotas.

After some discussion, we decided to take the somewhat extreme step of moving the second guillotine from across the shop floor so that it was side by side with the primary guillotine. The idea was to use both cutters to work on one job simultaneously. The first cutter would trim the labels into strips. The strips would slide to the second cutter for trimming to the final size.

The effort immediately paid off in four ways:

Depending on your equipment, this can indeed seem like an extreme step. Yet for the right type of recurring finishing work, it can pay off in no time at all.

Reduce the handling of work-in-process by moving machines to meet the work. Drills, padding racks, and other small pieces of finishing equipment can often be mounted to a pallet or cart, or have casters added to make them mobile. If adding mobility to a machine can eliminate a handling step, it will probably pay off in increased productivity.

Spend a little time researching what accessories might be available for each piece of bindery equipment.

Conveyor deliveries can replace tray deliveries on scoring and perforating machines to increase your average speed. Or roll a right-angle folding unit over to your scoring machine for additional folding capability.

Use conveyors or tables to connect work stations. Instead of stacking work, then moving the pallet or cart, then picking it up again at the next station, it might make sense to move it via conveyor to minimize the number of touches. There are also paper handlers, lifts, air tables and other ways to move paper and jobs around the shop with less effort.

You can generate substantially more yield by simply changing the schedule. For instance, we know that grouping stitching or folding jobs together which are the same or close in size can save significant setup time.

But it might be the custom in your shop to prioritize the schedule according to particular customers, or for the boss, or sales people without regard to trim sizes. It’s not always possible but a little discussion or a brief phone call might be all that’s needed to reorganize the schedule to the bindery’s (and ultimately the entire shops’) advantage.

Work habits and customs usually exist for good reason. But sometimes they work against us.

For instance, let’s say your guillotine cutter operator has always worked alone, and it’s always been productive that way. One day you start to encounter cutting bottlenecks. Your first thought is probably not going to be about giving the operator a dedicated helper. I find most people think first about overtime.

Instead, a helper might be exactly what’s needed. A dedicated helper can keep the material flowing, get the next job ready, get the packers prepared, jog the lifts, and move finished material. Over the years I’ve found this to be a great way to double or triple cutting production under some circumstances. Yet it may not be your first thought because it’s not customary; it’s not a habit.

The same concept holds true for folding machines. Let’s say your workflow is just fine with a folding machine operator who always works alone. Then you get that half million quantity job that is due in a couple of days. Adding one or two dedicated helpers to the folding machine can dramatically boost output in a given time frame, especially if you are running two or three up.

Another neglected area in the People category is Cross Training. A little bit of inter-departmental cross training goes a long way towards making your entire operation more productive.

To sum up, don’t wait until you’re in a jam to start figuring out how to be more productive. Always be thinking! Take a look at these six often overlooked areas and you just might find some simple, effective ways to get more from what you have.