My first day in the printing industry made me feel like I was one step closer to being a rock star. I had moved to New York City in the late 70’s, telling my parents I was going there to attend college. The real reason was that I wanted to join a rock-n-roll band, get a record deal and tour the world. You had to go to New York or LA to make that happen. 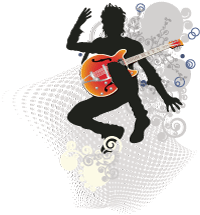 I found a band that would have me as their bass guitarist, I attended Columbia University part time, and soon found myself working with the band leader in his parents’ printing company, sandwiched between the city’s meatpacking district and Greenwich Village.

After the usual first-day introductions they set me to work collating sheet music by hand. The piece was Christopher Cross’ Ride Like the Wind, his mega-hit song from 1979. I remember thinking how cool it was just to be surrounded by the aura of musical stardom. It didn’t matter if it happened to be in the industrial atmosphere of a commercial printing bindery department.

Of course I understood that manually collating 10,000 sets of sheet music would not make me famous. Yet simply participating in the production of music for a hit song was an authentic New York experience. And that was good enough for a twenty-something bindery guy with zero experience and a serious need for cash in an expensive city.

In reality I had an advantage. My little fantasy gave me a big picture outlook on the menial task set before me. I liked to imagine what it would mean to me as a musician to have a company distributing thousands of sets of sheet music for a song on which I had performed. I knew it would mean a lot and of course I’d want it done perfectly.

With such a viewpoint, as both potential customer and producer, I performed the task with extra care. So when my supervisor said they had to be done before I went to lunch, it didn’t bother me so much because I had a sense of the importance of the job. When the owner corrected me on my shoddy shrink-wrapping of the project, I didn’t feel put upon or overwhelmed because I had already subconsciously put myself in the customer’s shoes.

In hindsight these were some great lessons for a first day at a new job. Of course we all expect to get a list of tasks, priorities and expectations when we settle into a new job. One of the most important things I learned was to always take it a step or two further than the job description in front of me, to think beyond myself.

It’s not that hard. Put yourself in your bosses' shoes for a minute. (We all have bosses.) What do you think is expected of him by HIS boss? What pressure and expectations is he or she facing? Always try to understand what your boss is trying to accomplish. The reasons behind their actions are rarely arbitrary. If you get a good feel for that, you'll do your job better and you benefit in other ways.

Try to imagine the problems and expectations faced by the owner of your company. In any job, the daily activities and stresses of small business can be wide-ranging and seemingly without reason. There is always a reason. In the end it may not make sense to you, and you might even disagree. But if it makes sense to the person to whom you’re accountable, and you understand that reason, it’s a lot easier to accept and to hop on board in support.

Ultimately, we should try to understand what customers want, because that’s what drives everything. In the end, it is the customer who signs your paycheck. If you take some time to understand that, your first day and the many days to come are far more meaningful than if you stuck to reading the boring job description in front of you.

The first day on a new bindery machine usually gave me the same feelings as the first day on a new job. It could be intimidating, even after many years in the industry. It was more so when the owner brought in a customer, their ad agency, the company sales reps and production people to watch you run a critical job.

Chuck Yeager, the famous test pilot who broke the sound barrier, said about flying the dangerous X-1 rocket plane, “It wasn’t that the X-1 would kill you, it was the systems in the X-1 that would kill you.” The secret to his success was that before he operated any equipment (in his case, dangerous airplanes), he would learn the systems inside and out.

In my first year or so running an ancient Sheridan saddle stitcher, I didn’t really understand much about how and why stitcher heads operated. The result was a lot of needless stitching problems and wasted books, along with broken and prematurely worn parts. When I took time to fully understand that particular part of the binding system, my results improved dramatically.

The ‘system’ on your job might involve bindery equipment, software or management procedures. Whatever the system, learn the ins and outs before you take off and you’ll likely have a smooth landing.

The first day of retirement hasn’t arrived for me, nor do I have any plans for it. I’ve noticed however, that we get numerous requests from folks in the industry to keep them on our Bindery Success™ mailing list after they retire. That says a lot about the industry. After a lifetime of working in printing, they'd like to stay in touch with people, events and ideas. There are good memories and the challenges have their rewards. For the newcomer, this is a good sign of things to come! It means you have much to anticipate.

There will always be a new ‘first’ in your future. You can count on that. Whatever it is, remember to think of the big picture, to think with the ‘big hat on’. We’re always students. I’m not jumping around on a stage these days, unless you count playing with the church choir as a gig. But I’m still relishing the adventure I embarked on when I took off for New York City, and I still remember the lessons.