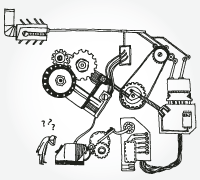 Usually our work habits guide us smoothly through the day. We know without thinking which way to load the paper in the folder, press or cutter. We know by heart all the make-ready steps for dozens of jobs on numerous pieces of bindery equipment. Yet sometimes these good habits can turn against us. Here are four simple things to try when perplexed by your next post-press problem.

Sometimes our intense focus on a particular task prevents us from seeing the solution to a problem. One of our favorite examples was sent to us several years ago by a Bindery Success reader. They initially had problems folding jobs printed on their copy machine. It was discovered that when they changed the order of printing and printed the inside of the folded piece first, the "folding" problem disappeared. The sheet still had curl but static problems were reduced substantially and the copier jobs now folded like a charm.

Sure, we could ask more questions to dig down to the root cause, but it doesn't really matter. Your circumstances could be much different. The point in this case is to look at the whole process, not just the task at hand. Your problem might be originating further up the line.

Speed it up or slow it down. It’s easy to forget how much force is at work in all the bindery and printing equipment we run. Just ask anyone who's pinched their finger in a fold roller or smashed their hand under a guillotine cutter clamp.

In Binding, Finishing, and Mailing: The Final Word, the authors give a simple description of the changes at work inside a folding machine. "Folding speed stresses paper at a geometric rate. For example, if the stress on a sheet is 5 when the speed is 5 (these numbers are only relative) doubling the speed to 10 means that the stress jumps from "5" to "25" instead of the linear "10." In this case, doubling production speed translates to a five-fold increase in stress - enough to ruin a project."

Sometimes you just need to slow it down a bit, or a lot, to get rid of a problem. Then there are times you'll need to speed it up to truly force the sheet to do what you want it to do. You might, for instance, need to speed a folder up to get the sheet to register properly in the cross carrier of a right-angle section. Whatever folder, stitcher or binding line you’re working on, it’s usually pretty easy to try a different speed.

This applies to both flat sheets and signatures running on any type of press or bindery equipment. We've heard of pressmen fixing a feeding problem by simply twisting or tumbling the sheet, using the original tail for the gripper.

Having a problem with feeding a curled signature? Sometimes turning it around will do the trick. On an inserter-stitcher it might be harder to open the signature but if it feeds smoothly, it’s worth the extra few minutes of setup time. A curled job on the folding machine might breeze through if you just flip it over so the curl is opposite. Not always, but it’s easy to test.

When faced with problems, it pays to challenge assumptions. Just because it’s always been done a certain way doesn’t mean you’re limited to that.

Don't be afraid to ask another operator or colleague for advice, they may bring a different perspective than you that could solve the problem. Other operators may not be constrained to the same set of ideas about Folding Machine operations as yourself.

Brainstorming with a group is another good way to stimulate creative problem-solving thoughts. Don’t shy away from involving people who don’t even run bindery equipment. An outside viewpoint can be most valuable since they don’t have any task-related habits to narrow their thinking.

These four tips aren’t exactly rocket science, but the overall concepts are simple. Stop, step back and try a few easy steps. Most take no more than a few minutes and it might very well solve the bindery problem you’re facing.