A Print Shop Messenger with an Unforgettable Message

I always think of Bernard this time of year. This week I ran across an old picture of him taken at our printing company’s Christmas party in the early 80’s. It’s as if he somehow made that photo appear to say, “Hey, don’t forget about me!” 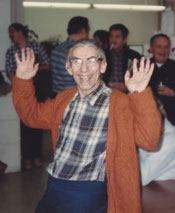 He was a little man with a big spirit who would do anything for you. Unless you made him mad. Then he would walk past as if you didn’t exist, lips pursed, eyes narrowed and focused somewhere in the distance. You never wanted to be on his bad side.

Bernard was a messenger for my employer, Arcora Litho, a New York City printing company. His job was to pick up mechanicals (remember them?) from ad agencies, deliver proofs and pick up or deliver anything else needed to keep the company running smoothly.

If you took the time to get to know him, he would pick up your morning coffee and bagel, get your lottery tickets, place your bet on a horse at Off Track Betting or pick up your lunch during his runs around town. On those icy, blustery days his was a tough job, slogging the wind-tunnel streets of New York City. But he did it with a merry heart no matter how cold and miserable it was outside.

It’s the image of him as a slightly crazy looking Santa’s helper toting shopping bags full of gifts to customers around NYC that always makes me think of him this time of year. His appearance sometimes bordered on that of a homeless person, with his slightly oversized second-hand overcoat nearly dragging the ground, baggy cardigan sweaters and a roll-brim, Russian-style fur hat pushed down hard on his head.

But he wasn’t homeless and had an apartment in Brooklyn. He was a happy guy. He didn’t have much in the way of material things but he had everything he needed. He gave his all to his job and was adept at finding his way around the city. Nothing could keep him from his rounds. Yes, he could get a bit crabby. But who among us wouldn’t, especially if you had 25 co-workers, in addition to your bosses, making daily requests for this favor or that errand.

He had a subtle way of making me not take myself so seriously. On busy days I would arrive at the printing plant very early and soon thereafter Bernard would appear, his distinct Brooklyn accent calling across the empty shop, “Oh Annnnndre…” He liked to chat in the morning before getting underway. On normal days, that was not a problem. But on an intense, pressure-filled day, such chit-chat could get a little under my skin. He knew it.

So he would saunter over to me with his morning greetings. Standing behind me, smiling, watching me work, asking an occasional question, he’d try to find the right balance between amusement and annoyance. Just as I reached the point of being annoyed, I would turn around, look at him and we’d both burst out laughing. Then he’d pat me on the back and be on his way to greet someone else. You could never stay mad at the guy.

Most of us would let him keep some or all of the change from the breakfast and lunch runs he made. He appreciated those tips and always received them with a sincere “Thank you very much!”

Did he dream of being a messenger when he was kid? Probably not. Yet he embraced it and did it to the best of his ability for many years. He proved to us that there is honor and dignity in all work.

In his unique way he was a messenger for much more than the material things that kept the printing business running. He was a daily example of the spirit of gratitude. He demonstrated by example an exceptional work ethic; it was tough to get to the shop before he arrived and he rarely called in sick. He was generous with his time, going so far as to do things for us on his own time. Lastly, he taught us not to take ourselves so seriously.

These days I am sure he is a messenger for St. Peter. And when I get to the next world, I wouldn’t mind seeing him there to guide me. He’ll know exactly where to go to get the best coffee and bagel.

As always we welcome your stories and comments below!