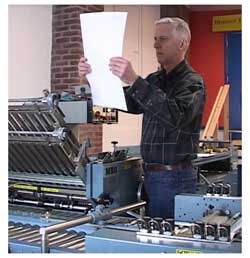 I’m fortunate to run across bindery equipment problems that occasionally leave me mystified. I say ‘fortunate’ because there is almost always an opportunity to learn something when we encounter a problem, even if it seems unsolvable. The examples here illustrate four things I’ve learned about bindery equipment troubleshooting in particular and perhaps a little about life itself in general!

One customer experienced problems with a simple 4-page flyer, 8.5x14" folded in half, digitally printed on a 100# C2S text.  That’s about as simple a folding job as you can get, right? The problem was that it simply wouldn't fold. It would hit the fold plate and stop dead in its tracks, with the machine still running. Every folder technique was tried including changing fold plates, fold roller pressures, speed, sheet orientation, static elimination methods and more. They also ran it in the right angle section with a crease added in the first section with no better results.

This problem occurred only on heavy coverage jobs from a particular copier. The solution was to add an inline folder/stitcher unit for that copier. While this solved the production problem, it didn't answer the question as to why those jobs wouldn't fold. In that sense it was a troubleshooting failure.

Lest you think this is just a quirky, outlying event, another similar job was shipped to me from a different company. The folder operator said the sheet was so slippery they couldn't get it to register to the side lay of the folder. Folding was out of the question.

I admit to being slightly skeptical since I'd never encountered that problem myself. I felt certain I could get them to run…somehow. Yet I couldn't even get them to load properly in our continuous feed MBO folding machine. I even purchased special small-sheet rollers to hold the sheets in position as they rounded the drum. No luck there. I never got to the point of trying to get them to register.

This company's solution was to "ban" the use of UV coating on two-sided digital work with heavy coverage. Yes, once again the immediate production problem was solved, but the real reason why this occurs has not been answered.

Because we always welcome all kinds of bindery equipment questions here, it leads to such interesting cases as those mentioned. I’ve learned a few things from receiving hundreds of questions and calls through the years.

1) Don't let your biases derail your efforts.
We all have them. Even though I’m not experiencing the problem, the very act of listening to the description of an issue can raise emotions or biases in my own thinking. In the example above, I “knew” I could get the job to run. That’s a mixture of the “Illusion of control” bias in which we overestimate our ability to control things, the “choice support bias”, in which a person thinks positive things about a choice once they’ve made it, and the “confirmation bias,” the tendency to believe or remember information in a way that supports our own beliefs. Or put more simply, we want to be right and we avoid those things that may prove us to be wrong.

I’ve also learned it’s best to talk directly to the operator who is experiencing the problem. When a supervisor or manager is in the middle, biases blossom everywhere! The operator colors his or her testimony about what happened because they don’t want to appear foolish or stupid in front of their boss. You can truly hear this in a conference call. But when I talk one-on-one with the operator, the guards come down and the unvarnished truth comes out.

The supervisor has a different agenda in that they want the problem to be gone…right now. Anything that gets in the way, even a patient, methodical troubleshooting process, is seen as part of the problem.

2) Don't let emotions derail your efforts.
It’s amazing how many incoming technical questions are accompanied by emotion, usually frustration. Yet one thing I know from experience is that getting emotional, angry, frustrated, or impatient makes one a less effective troubleshooter.

Patience and persistence are required. If you're an operator or manager under pressure, this can be extremely hard or even impossible! I recall sitting underneath an old McCain saddle stitcher late one night, twelve hours or more into my day, trying to fix a problem (I don’t recall the problem) and meet an impossible deadline. Frustration had me throwing tools across the room…not very helpful under any circumstance!

3) Look to the simple first.
We talk about using the 80-20 Rule to help with folding machine troubleshooting efforts. 80% of most problems can be traced to only 20% of the possible causes, most of which are simple. In many of the calls I receive, the fix is obvious (to me as an outsider), or a call to the mechanic for a tune-up or quick repair is all that’s needed. In the examples above, the 80-20 rule can be used to systematically and quickly rule out the majority (80%) of possible causes for the problem.

4) Undertake a troubleshooting methodology.
OK, that’s a scary phrase. All it means is that there should be a process in place for figuring out any given problem. I’m not talking about system knowledge, for instance, your knowledge and experience with folding machines; we assume you have that. I’m talking about a process for troubleshooting and problem-solving.

Such processes typically involve several steps: getting information about the issue, guessing (hypothesizing) what the causes might be, testing, then repeating the process until the culprit is found. It’s a bit beyond the scope of this article but we’ll have more on this subject in the coming weeks.

Regarding the mysterious problems mentioned earlier, I can certainly make an educated guess as to the culprit. Something is reducing the paper’s coefficient of friction (its resistance to sliding) and possibly increasing its stiffness so as to make it impossible to run. But then we’d have to test it to know that for sure.