Although I sometimes feel like one, the term folding dummy doesn’t refer to me. Nor is it a description of your least productive folding machine operator. For our purposes, we’ll define folding dummy as “a sample page layout sheet which has been folded into its designed format to indicate page sequence or other binding and finishing information.” We could also add that it’s best if done at actual size, but as you’ll see, it’s not always necessary.

With all the good design and pre-press software available today you might think that there is no longer a need for an old fashioned hand-folded dummy. Yet there are things the computer can miss or simply can’t do. That’s where the folding dummy comes in handy. Here are ten reasons you should be using them.

1) They eliminate confusion. Despite the existence of print finishing jargon, there isn’t really a systematic, universal terminology. Trish Witkowski at foldfactory.com has done an awesome job of naming 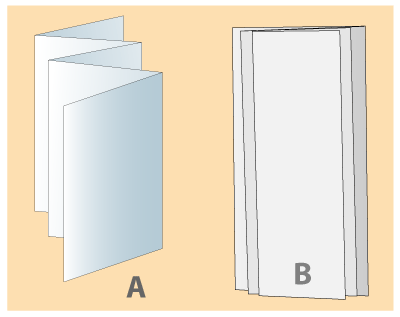 and cataloging every conceivable fold. Unfortunately, it’s not universally applied. After more than 35 years in print finishing I still hear new terms.

There are many ways to articulate even the simplest of folds. For instance, the photo at right shows two five-panel accordion folds. “Five-panel accordion fold” probably sounds specific enough for most printers, designers, and trade binderies. Yet if you tell your bindery you’re sending one, he probably expects version A. Then you send him version B. That’s when the fun begins. Providing a folded sample before the job is printed eliminates the potential for confusion.

2) Folding dummies give you instant feedback on the logic of the fold. Does the design work? Does it make sense to the end user? An actual folded piece will give you clues about such problems.

3) They alert you to mechanical paper problems. Get the folding dummy made up on the actual paper before committing to the job. A job that folds well on 50# offset might not work on 100# text or 100# cover.

4) You get accurate postage estimates. A trip to the post office or mailing house also ensures that you’re not missing out on some important regulation that will affect the mailing of your piece. Just make sure it’s the actual paper, size, and folded configuration. You’d hate to design a self-mailer only to find out that it has to be mailed in an envelope. 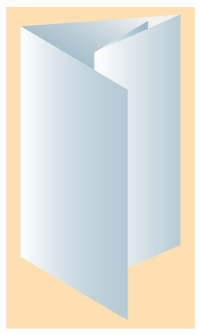 5) You get an idea of how much folding compensation is actually needed. How many times have you seen jobs for which dummies were clearly never made at any point in the process? For instance, a four-panel roll fold (drawing at right) has three panel sizes, not one. Some designers learn that the hard way. We in the bindery then try to adjust and compensate in order to salvage the job. You can’t change the size of a printed panel no matter how much the customer yells.

Even if you’re using layout software, it’s a good idea to confirm panel sizes by making a sample on the actual paper. Then show it to everyone involved.

6) They show you how much creep is actually needed in the signatures for a saddle stitched book. Use the folded sheet to confirm your design estimates for creep (pushout). As with panel sizes, software-generated estimates are OK, but paper and toners will vary in thickness. A tiny difference between your estimate and the actual sheet, multiplied over dozens or hundreds of pages adds up to a serious problem. The dummy will alert you. If the book is without folios (page numbers), a marked-up dummy will ensure the book is assembled in the right order.

7) They give clues as to whether creasing will be needed prior to folding. If you don’t know whether your intended paper will need creasing, a folded sample will give you a good clue. If you see cracking or splitting on a blank sheet, you’ll definitely need to crease the printed piece. Be sure to send the sample to the bindery department.

8) They tell you if there will be production problems. Let’s go back to our five-panel accordion fold. A layout with equal panels is an entirely different job than a five-panel, asymmetric accordion fold in which each panel is a different size. The first is easy to setup and run on any floor-model folding machine. The second job, depending on the panel size, may or may not run on an automatic folder, may or may not require creasing, and may or may not have to be done by hand.

9) They eliminate folding mistakes. A dummy submitted to the bindery should always be marked up for folding. A folded sample can easily be re-folded a different (wrong) way. Without marks, an accordion fold becomes a letter fold, or vice versa. In fact, Murphy’s Law dictates that something like this will happen! And it will happen on the night shift when no one is there to catch it. When a sample is marked properly, there is no confusion about which way it folds.

10) They keep everyone happy. If there are many people involved in a project, there are just as many agendas and priorities. Some of these might even be hidden, if you can imagine that! When everyone involved in a print project sees the dummy, no one has an excuse for not having his or her agenda fulfilled.

Such a simple piece of paper can make all the difference between profit and loss on any given job. They only take a few minutes to do, and there is no good reason I know of not to do them. If you’re not doing them now, don’t let this oversight make a dummy out of you.