So You Want to Be in Printing?

Thinking about a career in the printing industry? Are you an aspiring print service provider? Then take a walk in one printer’s shoes as he lives through a week’s worth of adventures. Is the story true?  Is it from this century, or the last, or the one before it?  Couldn't happen, you say? Probably not in most places, but it did happen, in a print shop near you, somewhere close to the Twilight Zone.

MONDAY, FEB. 9. - Got through the payroll fine today. Boggs paid the forty dollars for the job we did last week and didn't take off any discount for cash, so I didn't have to hustle around after last month's accounts. It's a pleasure to do work for a man like Boggs. He said the job was satisfactory, too. Makes a fellow feel like a real man to have a customer like that! Gave my wife $6.00 to spend on herself on the strength of it.

TUESDAY, FEB. 10. -Haskins came rushing in at four o'clock with an order for 1,000 billheads, and wanted a handful right away. All out, and the bookkeeper didn't tell him. I figured I lost 50 cents on the last order of billheads and tried to raise the price on him a dollar. He complained like mad and said I was trying to hold him up because he needed them right away and he hadn't time to hunt around for prices. We compromised on a 50 cent raise. Before I got the billheads running he was back with a letterhead for me to figure on. I didn’t dare raise the price on this, but after he gave me the job he said he was more in a hurry for letterheads than he was for billheads. Rush work upsets the office.

WEDNESDAY, FEB. 11. -Haskins camped in this office this morning till I got him some letterheads. He was back in about fifteen minutes for billheads. Said he had to suspend business till he got stationery, and if he had as slow a bunch around him as I had working for me he would go crazy. I wanted the pressman to hear that remark to offset his kick for a raise. In consequence I was half an hour late with the local café’s bill of fare and had them on my back. And not one of the jobs was profitable. They keep the wheels going, though, and are handy to meet payrolls with. 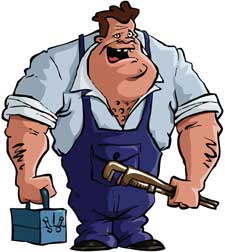 THURSDAY, FEB 12. -Billy, the pressman, left the pin out of the roller arm this morning and a roller jumped out and broke the throw-off, besides chewing up the roller. They sent a bonehead machinist over from the shop, and it took about all day to get it patched. Guess that will hold Billy awhile on the raise question.

Then Jones called up about his work promised for yesterday (that I had to sidetrack for Haskins) and I sprung that broken press on him, but promised to have it running in an hour.  After dinner he called up again, and I promised to call the machinery house to find out what was going on with the press. In the meantime, on the other presses I was trying to catch up on promises that extended back a week. The broken press was my excuse for all delayed orders. Even a broken press is handy sometimes.

FRIDAY, FEB. 18. -Scraped money enough together to make a substantial payment on December paper bill. Have to keep those fellows quiet, for I must have stock. They’ve got my note for November and part of October account, but it isn't due until March, and worry won't pay it. That last 10x15 press I put in don't seem to ease money matters up much. It runs fast enough to keep me busy buying stock and getting jobs for it, and I sometimes wonder if it wouldn't pay to do less. But I hate to pass up work offered even if the price seems low. If other printers can make money on the work at those prices why can't I?

SATURDAY, FEB. 14. -The machinist’s boss had the nerve to come in today to ask me to pay him for repairing the press. Eight dollars he charged, too. Said it was all labor, and he had to pay his hands every week. He charged $1.25 an hour, too, for that bonehead's time. Wish I could sell time in the printing business like that. He's got the correct theory, though. He hires the best men available, and then the time put in on your job is what you pay. In printing we have to estimate the time beforehand; and if we hire a bonehead the boss stands the loss, not the customer. I suppose that’s the difference between "art" and mechanics.

SUNDAY, FEB. 15. -Had to work today to try and catch up on some promises of last week and the week before. Can’t afford to pay hands double time for work, not with the printing prices you find around here. Got an apprentice pressman to come down on a promise of 50 cents but he mustn't tell my crew. Got out three jobs and added $9.50 to the revenue of the office at an expense of 50 cents. Besides, I balanced accounts for the week and find an apparent profit of $20.15, not counting my salary, which is what there is left after everybody else is satisfied. I say apparent, for there is the broken press; it must figure in there somewhere. That isn't much money for a brilliant man like me to make.

Feel free to share your own adventures and comments below!