How to Get Powerful Ideas to Solve Your Print Finishing Problems

When you hear about creativity in the printing industry, what do you think about? Maybe designers, ad agencies, graphic artists, or similar creative types come to mind. The fact is that creativity is important in all jobs from design through to print finishing and mailing. Whenever you try to solve a problem you are turning to a new idea. That too, is a form of creativity.

I sense that print finishing people generally seem to be a creative lot. Their eyes light up when talking about a new way to do something. It usually involves some kind of bindery equipment, like combining separate saddle stitching and tabbing operations into one, as shown here in this video. But it could also be something like a training program, maintenance procedures, or a checklist that sparks their imagination.

There really is no limit to getting creative when it comes to solving print finishing problems. But what if you don’t feel as if you’re the “creative” type? Not everyone feels they deserve the label. Is there a way to nurture that creativity lying dormant within all of us in order to inspire new ideas?

“With regard to the general principles which underlie the production of ideas, it seems to me that there are two which are important. The first of these has already been touched upon…namely, that an idea is nothing more nor less than a new combination of old elements.”

“The second important principle involved is that the capacity to bring old elements into new combinations depends largely on the ability to see relationships…Consequently the habit of mind which leads to a search for relationships between facts becomes of the highest importance in the production of ideas.”

In short, he claims that anyone can use a process to come up with ideas. Though Young is writing about creativity with respect to his advertising profession, the concept applies to any profession. When we are stumped by operational, equipment, strategic, sales, shipping, learning, or any other problem, it’s time to come up with new ideas.

He goes on to outline his 5-step  plan for generating ideas. 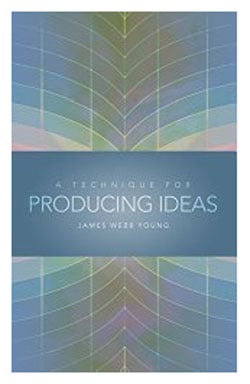 The author talks about index cards but today you can use a computer in a similar fashion. Write it all down. Keep files of anything interesting. To come up with ideas for the Bindery Success Blog, I keep word documents in various folders. They include tech questions, incidents, un-solved problems, personal stories and hundreds of bits of information which may or may not be relevant one day.

I also have lots of books and keep folders of reading material and articles on anything that’s interesting to me.

Step 2: Digest the material. If you have a thought about any of the material you’ve collected, write it down. It doesn’t matter if it’s incomplete or just a shred of an idea.

Step 3: Put it out of your mind. Don’t think about it. You turn it over to your unconscious and let it incubate. Let your mind work the problem while you sleep. “Listen to music, go to the theater or movies, read poetry or a detective story.” Engage in that which stimulates your imagination and emotions.

Step 4: The Idea appears. “And here again is the way it happened in the discovery of the half-tone printing process, as told by Mr. Ives, the inventor of it: While operating my photo*stereotype process in Ithaca I studied the problem of half-tone process [first step]. I went to bed one night in a state of brainfog over the problem [end of second and beginning of third step] and the instant that I woke in the morning [end of third step] saw before me, apparently projected on the ceiling, the completely worked-out process and equipment in operation [fourth step].”

When the idea appears, write it down or record it before it disappears. Ideas are fleeting and elusive. Once it’s gone you may not be able to get it back.

Step 5: The idea meets reality. “This is the hard part. You have to work the idea over to make it practical. Do not make the mistake of holding your idea close to your chest at this stage. Submit it to the criticism of the judicious. When you do, a surprising thing will happen. You will find that a good idea has, as it were, self-expanding qualities. It stimulates those who see it to add to it. Thus possibilities in it which you have overlooked will come to light.”

You can be creative no matter how much experience you have. Sometimes it’s even better to be a novice approaching a problem without any pre-conceived notions. You might see a solution that the expert dismisses because he or she “knows” it’s not possible. Of course if it’s your first week on the job you need to get the lay of the land and learn how things work. And you want to do things properly so you don’t upset any customers.

If you’re a bindery veteran, you can hone your creative troubleshooting skills using Young’s process. Without knowing it, I’ve been using it for years. It’s simple and surprisingly effective. You can get a copy of his book here. It’s well worth the few dollars, especially if you generate just one idea.

Have a story or comment about how you come up with ideas? Let us know below in the comments. Don’t forget to share the article with your friends and colleagues.