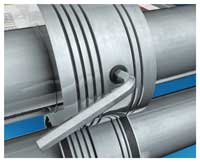 One of the unique Tri-Creaser design features is the ‘floating female’ component that comes with several of our popular folding machine models. What exactly is the floating female? No, it’s not the tooth fairy or the woman at the next table who’s had too much to drink. 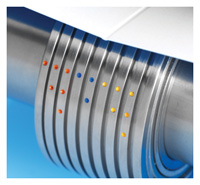 Conventional rotary scoring tools use a set screw to lock the components in place as do many other Technifold products (photo left). Technifold’s floating female has no set screw. (photo right) Instead, it has bearings fitted to the inside which have a snug, sliding fit on the slitter shaft. The grooved part of the component is thus allowed to rotate freely without doing harm to the shaft.

Setting it is simple. The folder operator selects an appropriate creasing rib and locks the male in position with its set screw. He or she then pops the slitter shafts apart and slides the female into position so the correct channel is lined up with the rib. Once the folder is running, the action of the sheets passing between the male and female automatically keeps the female channel centered. (photo lower left) 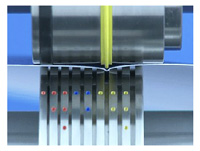 The reason for the design stems from the tendency of lighter stocks to sometimes nick at the lead edge during rotary creasing, especially on high-speed folding machines. We discovered during experimentation that a feely floating female component reduced and often eliminated this problem, so it was incorporated into several of our more popular versions for folders.

For slower equipment such as scoring machines or cover feeders on perfect binders and saddle stitchers, nicking is not usually an issue and if it is, there are other fixes to the problem.

But those in the bindery department seem to always push the folding equipment to the bleeding edge and beyond. In doing so we found there are times when it might be preferable to have a way to lock the female into position in a conventional fashion, and below is a simple way to do just that.

The reasons for doing this include:

So how do you lock it in position if needed? The workaround is simple. Take two pull-out wheels (or counter knives or other similar slitter shaft tools,) position them on either side of the floating female, snug them tightly together and lock into position. (photos at left.)

Now you have the female collar locked into position.

When doing this, be sure you center the female channel over the rib. The best way to do this is to lock either the male or female side of your creasing setup in position. It doesn’t matter which is loose. Then run a sheet of cover stock through a revolution or two and with the sheet still gripped by the creasing tool, tighten the loose side. It should now be centered. (Click here for a more detailed Bindery Success Blog video tip on this.)

All in all, the floating female has advantages in high-speed operation with lighter stocks:

With the simple technique outlined above you now can run it as a fixed unit whenever the occasion or the operator calls for it, reverting to floating operation when the job is done.