As a kid I loved escaping into science fiction books and magazines, blissfully wandering off to a future filled with incredible technologies. The stories made it easy to imagine myself in the cockpit of a 21st century spacecraft or a scientist in a cutting-edge lab. Whatever the story line happened to be I would get lost in the future fantasy.

The 21st century reality found me manning bindery equipment in a commercial printing operation. Perhaps it was a little less glamorous than the fantasies but it was still fascinating in its own right. I could look around the bindery department and take in technology that spanned more than 100 years of inventiveness.

What got me thinking about the future was this short piece from the 1913 Printing Trade News.

“What the Year 1914 Will Hold for Printers

Change the date to 2014 and you’re not far off the mark from what politicians and pundits say today. In fact it points to the one and only thing that IS possible to predict with any accuracy and that is human behavior. Human history is one of behaviors repeated since the beginnings of recorded history and likely before. What’s not usually repeated are those inventions which spring from the wonderfully limitless human imagination. 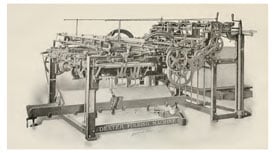 The folding and cutting equipment on my first job is a great example of inventiveness and imagination.  There was a very old Dexter continuous feed 32-page folder which was an ingenious mechanical contrivance with elements designed in the 1800’s. (No, that's not an actual photo of my machine, but of an even older Dexter.) Its only nod to modern technology was an electric motor and a vacuum pump with a single on/off switch. Everything else was controlled mechanically.

I vaguely recall that the owners wanted to scrap the folder (after all, it was old and slow and they were not in the museum business) but I asked them to give me a shot at learning to run it. As a bindery trainee, it was gratifying to get that behemoth running steadily all day long. It also surprised my boss that such a feat was even possible.

To me it was a piece of living history as well as a way to get inside the minds of clever inventors. You really have to see one of these old folding machines in operation to appreciate them. It was also a great learning experience. If you didn’t understand the principles behind the operation of the buckle folding machine, you’d never get an old one like this running. Sadly it was broken up for scrap metal some years later.

Each generation builds upon the last’s imagination. Within a few short years of learning the ropes on the old Dexter I also worked on state-of-the art MBO folders, Polar cutters, Bobst die cutters. All of these pieces of finishing equipment had incorporated electronic and computerized controls for various systems, allowing them to operate at speeds only imagined by the Dexter-era engineers.

For fun one day we decided to see how fast we could run a simple straight-line box on our new Bobst folder-gluer. We maintained about 125,000 pieces per hour until the packing crew at the end of the line told us to knock it off.

Sometimes the new comes from a creative combination of things at hand. I can’t help but think of Graham Harris’ Tri-Creaser, using rubber and steel in an inventive new way to change how post-press operations are done.

So what am I predicting for the future of bindery equipment or the printing industry in general? In 2114 politicians and pundits will be saying the same stuff, guaranteed. As for technologies, well that’s probably being shaped right now by some kid who’s reading a science fiction magazine or making a robot from his Lego set. Whatever the outcome, it will be surprising and will make our heads spin.

Feel free to let us know your vision of the future of bindery equipment below! Or better yet, share your experiences with old-school print finishing equipment.